Darwin’s Arch, a famous natural rock formation off the coast of the Galapagos Islands has collapsed on May 17, Ecuador’s Environment Ministry said on Facebook. 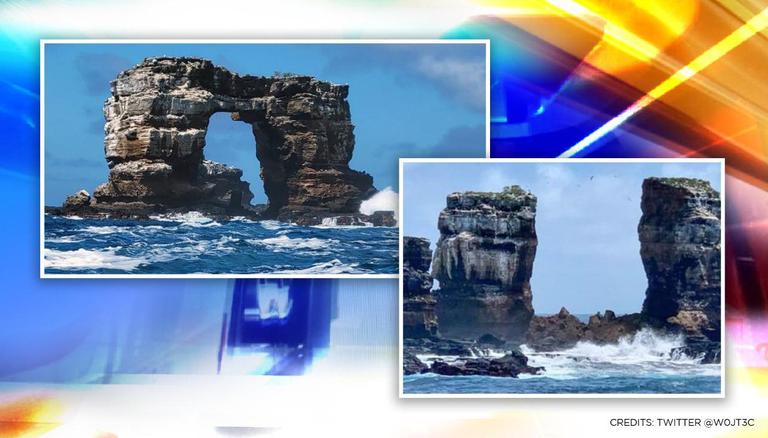 
Darwin’s Arch, a famous natural rock formation off the coast of the Galapagos Islands has collapsed on May 17. Ecuador’s Environment Ministry has blamed natural erosion for the collapse. They posted pictures on social media that showed rubble from the top of the arch had crumbled into the ocean with the two supporting columns still standing.

Darwin's arch collapses due to erosion

The ministry on their Facebook page said, "This event is a consequence of natural erosion. Darwin’s Arch is made of natural stone that at one time would have been part of Darwin Island, which is not open to visits by land." Adding that the site is considered one of the best places on the planet to dive and see the sharks and other species. The arch was located less than a mile away from Darwin Island, also named after Charles Darwin, the famous scientist who developed his theory on evolution and natural selection after visiting the islands in 1835.

The arch is famous diving spot to witness sea turtles, whale sharks, manta rays and dolphins. Washington Tapia, director of conservation at Galapagos Conservancy  Washington Tapia, director of conservation at Galapagos Conservancy felt nostalgic to hear the news, according to AP. He said that from a scientific point of view, it is part of the natural process. He further added that fall is surely due to exogenous processes such as weathering and erosion that happen on Earth. The tourist boating group Aggressor Adventures in a Facebook post said that the collapse happened around 11:20 a.m. local time and a tourist boat witnessed the "once in a lifetime event."

"Obviously all the people from the Galapagos felt nostalgic because it’s something we are familiar with since childhood, and to know that it has changed was a bit of a shock."