A Filipino oceanographer and an American explorer became the first people to dive into the Philippines Trench, the third deepest spot on Earth. 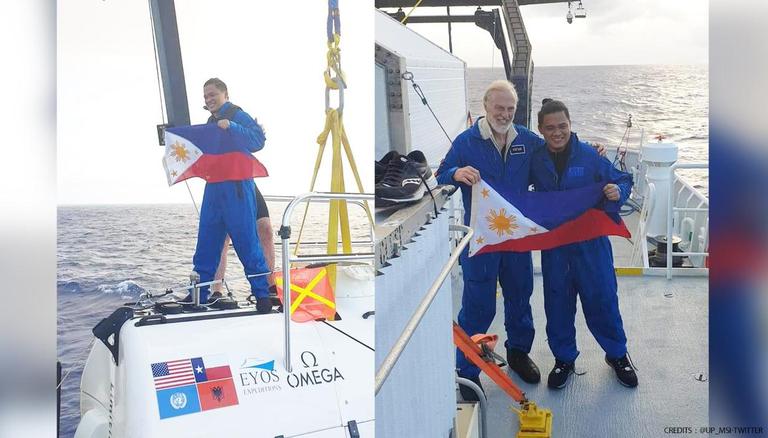 
An oceanographer from the Philippines and an American explorer became the first people to dive into the Philippines Trench, the third deepest spot on Earth. Dr Deo Florence Onda, who is a microbial oceanologist from the University of the Philippines Marine Science Institue, and Victor Vescovo from Caladan Oceanic were on the lookout for mysteries hidden in the darkness but instead, they surprisingly discovered plastic during their exploration. According to Channel News Asia (CNA), Onda and Victor travelled to The Emden Deep, part of the Philippine Trench, which happens to be one of the oldest seabeds on Earth, unexplored until a couple of months ago.

DSV Limiting Factor is back on the surface!
In the photo are Dr. Deo Florence Onda @savedeocean and Mr. Victor Vescovo after the successful ascent from the Emden Deep.
Photo courtesy of DSSV Pressure Drop#IntoTheEmdenDeep pic.twitter.com/hB8i8bOzXx

At its deepest point, the Philippines Trench reaches a depth of 10,540 meters and the Emden Deep is the portion of the trench that exceeds a depth of 6,000 meters. Over a 12-hour period in March, Onda and Victor, dedicated to advancing undersea technology, descended and explored the trench, hoping for just a glimpse of life below. However, what greeted them in the depths was something that had travelled from above the surface.

Onda and Victor are the first people to ever dive into these uncharted waters and the oceanographer had reportedly said that he expected to see “scary, crawling things” through the windows of the submarine. But after a four-hour descent, they found garbage on the seafloor. While speaking to CNA, the team said that they found plastic bags, food packaging, a teddy bear and even clothes.

Onda said that there was a point where he believed that the white material floating in the water was a jellyfish. However, after approaching he realised that it was just plastic. He said that due to the depth and the pressure of the environment, he had believed the plastic would appear as a small fragment, but they were “so intact as if they just came from the supermarket”.

Victor, on the other hand, said that the amount of human debris found in the Emden Deep scattered around in pockets on the seabed was “pretty extensive”. He further informed that in the depths where oxygen and sunlight are absent, plastic and other materials do not degrade. The discovery of plastic in the trench was shocking as the team is concerned that the transboundary nature of plastic spread in the oceans is having unknown but profound consequences on marine ecosystems, and in effect, on the very foundations of life on the planet.