Florida: Pit Bull Sacrifices Self To Save Kids From Venomous Snake

A Pitbull puppy sacrificed self to protect kids from a venomous snake. The dog was bitten by a coral snake which is one of the most venomous snakes in the world

A pit bull pup in Florida reportedly sacrificed his own life to protect the kids of a family from a venomous snake.  The dog, Zeus, a 9-month-old pup died after it was bitten by a Coral snake while trying to save its human companion. The incident took place when kids of one Georgina Richardson were outside the family’s home in Sumter County. They were cleaning the dog’s water dish when the pup saw the coral snake and attacked it, in turn being fatally bitten.

In an emotional Facebook post, the mother of the three kids wrote, “Sitting here dying emotionally. Zeus protected our kid from a coral snake. He is in critical condition. For those of you who hate pit bulls, unfriend me now, cause mine just protected my family and went as far as laying on it even after he killed it to make sure no one else got hurt.” 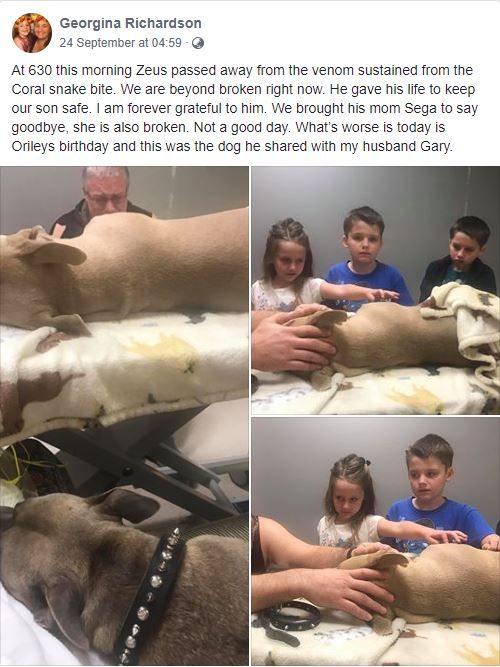 Zeus' family have reportedly been mourning his loss after he suffered painful bites from the snake. As per reports from a foreign media, the entire family broke down and was really thankful for his act. The dog attacked the snake all of sudden which was slithering beside their son, and in turn, he received four bites, said Gary, father of the kids to the US media. They found the remnants of the reptile which was headless lying beside him. It is presumed that the dog swallowed the snake's head, he was rushed to the Veterinary Hospitals in Ocala where he was administered anti-venom. However, the pup succumbed to the venom of the Coral snake.
Read: Brazil Law Firm Hires Stray Cat To Address Complaints Against It

Netizens stand by the dog and his family

The brave dog's story has touched many on social media. Netizens stood by the Richardson family in a hard time. Many even donated towards the high vet bill for the pup’s treatment and showered love to the family. The mother of the family said that he will be remembered as he has touched the hearts of many across the world.
Read: Chinese Passenger Opens Plane Emergency Door For 'breath Of Fresh Air'

The misconception about Pitbulls

Pitbulls are feared as people consider them aggressive and not a friendly breed to be around babies. In her Facebook post, Richardson mentioned that if people hate pitbulls then they should unfriend her.

The family highlighted the fact that pit bulls are the most loyal dogs in their and were quoted saying, "if a pit bull is aggressive then its because they weren’t treated right. If you treated with compassion, they would give their life for you".
Read: Surfer Has Close Encounter With White Shark, Netizens Shocked