Germany is set to begin its lower house of federal parliament elections on September 26. The vote will mark the end of Chancellor Angela Merkel's 16-year term. 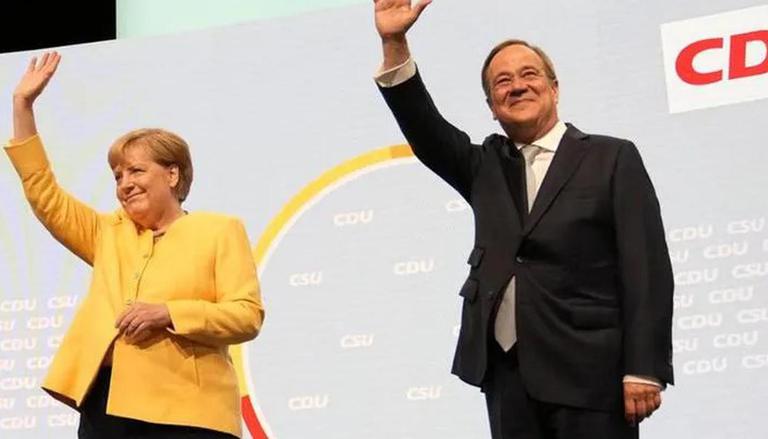 
Germany is set to begin its lower house of federal parliament elections on September 26, Sunday. The vote will mark the end of Chancellor Angela Merkel's 16-year term in office. As the parties gear up the election season, for the first time German opinion polls have given a lead to the center-left over the outgoing chancellor's center-right bloc.

As per reports, the poll ratings have displayed a dismal personal popularity rating for the incumbent Chancellor's would-be successor Armin Laschet after he was snapped giggling during his visit to the flood-hit town of Erftstadt. Following the slump in poll ratings, Christian Democratic Union (CDU) leader Laschet has kicked off the official campaign in Berlin. Both the leaders had addressed a small crowd in the country's capital on Saturday.

As the first woman to be elected as Chancellor, Angela Merkel played a vital role in the context of the European Union and NATO. She emphasised international cooperation and strengthened transatlantic economic relations. She negotiated the Treaty of Lisbon and the Berlin Declaration. Besides that, she also managed the global financial crisis and the European debt crisis.

Her domestic policies also made her one of the most successful Chancellor in German history. Merkel introduced the "Energiewende" program to ensure sustainable use of energy resources and increased use of renewable energy. On grounds of social reform, she also favoured the "mandatory solidarity mechanism" for relocation of asylum seekers as a permanent solution for Europe's migrant crisis. There are many more such reforms that make Angela Merkel's regime a significant term in German political history.

When will Merkel step down

German Chancellor Angela Merkel has become the longest-serving head of government in European Union. In October 2018, Merkel had decided to revoke from the fifth term as a Chancellor and declared to step down from the chair after the 2021 Federal Parliament Elections, the Bundestag. The 67-year-old office-bearer had been elected in 2005 and re-elected in 2009, 2013 and 2017.

The vote to select the next German Chancellor

Around 60.4 million German voters over the age of 18 will vote for the candidates in 598 seats on September 26. The votes will be cast for a local MP and a Political party in a ratio of 50:50. About 299 candidates will directly be elected from 299 districts and the rest bases on party vote share. The winning party will be declared by that night. However, the Councellor for the next term will only be determined after the winning party forms its absolute majority despite the coalition, the BBC reported. Thus, it is evident that the coalition party with the majority of seats proposes the Chancellor, who in turn has to be voted for by the maximum Members of Parliament (MPs).

Two leaders are in the run to carry forward Chancellor Angela Merkel's legacy. The conservative CDU leader Armin Laschet and its sister party Bavaria's leader Markus Söder. Meanwhile, center-left Democratic Party's Olaf Scholz, who is currently the Finance Minister is also in the run for victory.