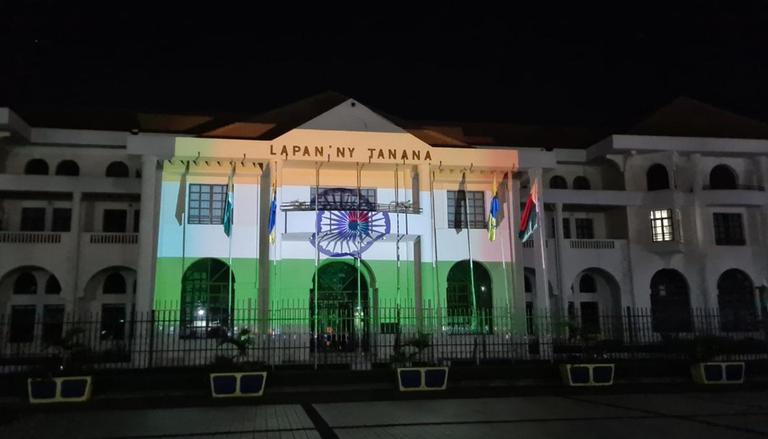 
As India is celebrating its 74th Independence day, Madagascar illuminated its iconic Town Hall building with the colours of the Indian flag on August 14. The  Indian embassy in Madagascar took to Twitter and wrote, "Madagascar's iconic building Town Hall, Antananarivo lit up with the Indian tricolour on the eve of the 75th Independence Day of India #AzadiKaAmritMahotsav." It has also shared a one minute video that shows the embassy building illuminated with the tricolour. Have a look at the photographs and video of the iconic building Town Hall:

The Embassy of India in Antananarivo also lit up in tricolour for the celebration of Independence Day. India is celebrating 'Azadi ka Amrit Mahotsav', marking the 74th year of Independence amid patriotic fervour. In order to commemorate the occasion, a series of events are being organised across the country. Earlier on the eve of Independence Day, the Indian embassy in Bhutan reflected the colours of Tricolour - saffron, white and green. "Let's light up the #AmritMahotsav celebrations tonight! Tricolour on the facade of the Embassy of India, Thimphu," India in Bhutan said in a tweet, attaching a picture of the embassy building.

Have a look at the Indian embassy in Bhutan:

On August 15, Prime Minister Narendra Modi addressed the nation from the national capital's 17th century Mughal-era Red Fort to mark the 74th anniversary of India’s independence from British rule. In his nearly 90-minute speech, PM Modi listed his government’s achievements since he came in the power. The Prime Minister also hailed the country's COVID-19 vaccination drive. "We are proud that we didn’t have to depend on any other country for COVID-19 vaccines. Imagine what would have happened if India didn’t have its own vaccine," Modi said.