North Korea’s economic turmoil could be attributed to COVID-19 lockdown that slumped growth, although Pyongyang's Jong Un has consistently denied any cases. 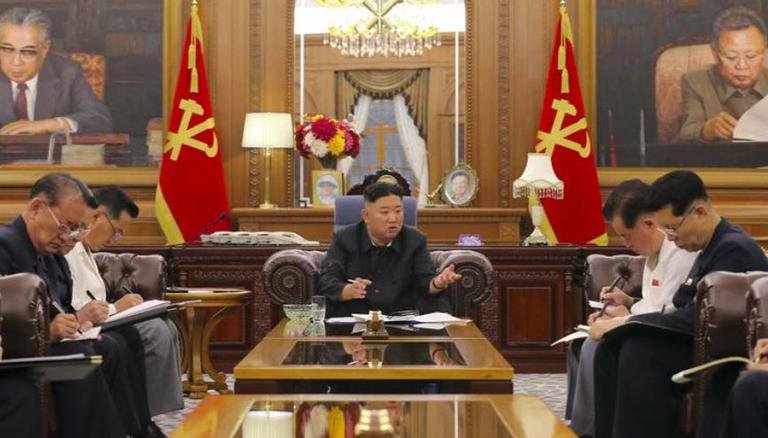 
In an attempt to revive the battered economy from the COVID-19 pandemic, North Korean leader Kim Jong-Un presented an economic plan to the senior ruling party officials ahead of a key meeting, the state media reported Tuesday. According to the Korean Central News Agency, Kim held consultations to prepare for the meeting of the Workers’ Party’s Central Committee which is expected to discuss the state affairs for the first quarter, 2021.

The North Korean leader planned to convene the discussions in early June, and the plenary meeting could now be held as early as this week. While it is unspecified how the authoritarian leader plans recovery of the China reliant economy after its worst contraction in decades due to the pandemic and US sanctions, the communist nation specified that it would bring  “tangible changes” to stabilise the situation.

Earlier in the year, Jong-Un called for greater state control over the economy, boosting agricultural production and prioritizing the development of chemicals and metal industries. These are the sectors that the North Korean dictator stated was critically depleted by US sanctions as also, the imports of the raw factory materials were disrupted due to the novel coronavirus restrictions. Last week, at a party meeting Kim had acknowledged the “ideological enthusiasm and fighting spirit of self-reliance” demonstrated by the members, adding that there was a need to address the unspecified “deflective matters" at the Party's plenary meeting in June.

North Korea’s economic turmoil could be attributed to the COVID-19 lockdown that slumped growth for businesses, although Pyongyang has consistently denied the coronavirus pandemic reaching North Korean boundaries, citing its long-closed borders to the world. Earlier, in its weekly monitoring report, North Korea told the World Health Organization (WHO) that it has registered zero cases of novel coronavirus as it became the first nation globally to shut its border with neighbouring China in January 2020, and there has been no contact as such with the outside world or the travellers entering country's premises from abroad.

An unnamed "official" source in the North Korean city of Rason, near Russia, had told RFA in March that in point of fact, as many as 6,000 cases and dozens of deaths COVID-related fatalities were registered in North Korea prompting immediate closures. Pyongyang, in fact, had consistently taken sweeping measures to contain the COVID-19 spread that hit hard its economy. The country’s strict self-isolation had left its economy in shackles. In a separate report, a special rapporteur on human rights in North Korea, Tomas Ojea Quintana told the United Nations Human Rights Council in Geneva that there was a drastic spike in the numbers of children and elderly begging in the streets of North Korea, as well as deaths by starvation due to the COVID-19.

North Korea’s prohibition of "free market" trade during the pandemic led to a famine within the country worse than one that hit in the1990s when the Soviet Union collapsed, and food supplies had hampered due to post-war North Korea's Stalinist economic system. Due to the deepening economic crisis in his communist nation, the North Korean leader Kim Jong-Un had also rung emergency alarms earlier, declaring food shortage at a closing ceremony of the Workers' Party of Korea, WPK meeting. Jong-Un referred to US-led sanctions as the cause for the economic difficulties, saying that the country was facing the "worst-ever situation” as trade with friendly neighbour China plummeted.