'Narco pregnancy': An Argentina woman was recently busted by the police as she pretended to be pregnant and faked a baby bump to smuggle a huge bag of cannabis.

An Argentina woman was recently busted by the police as she pretended to be pregnant and faked a baby bump to smuggle a large bag of cannabis. According to the Minister of Security, the woman was trying to smuggle nearly four kilograms of marijuana bricks. The authorities caught the woman and her partner who had been travelling in a long-distance coach bound for Santa Oliva in Patagonia.

The Minister of Security, Patricia Bullrich tweeted, “NARCO PREGNANCY! He made a belly with paste, hid 15 packages of marijuana and simulating a pregnancy, tried to move it from #Mendoza to #SantaCruz. We arrested the false pregnant woman and her accomplice. So he managed to traffic the drug!” 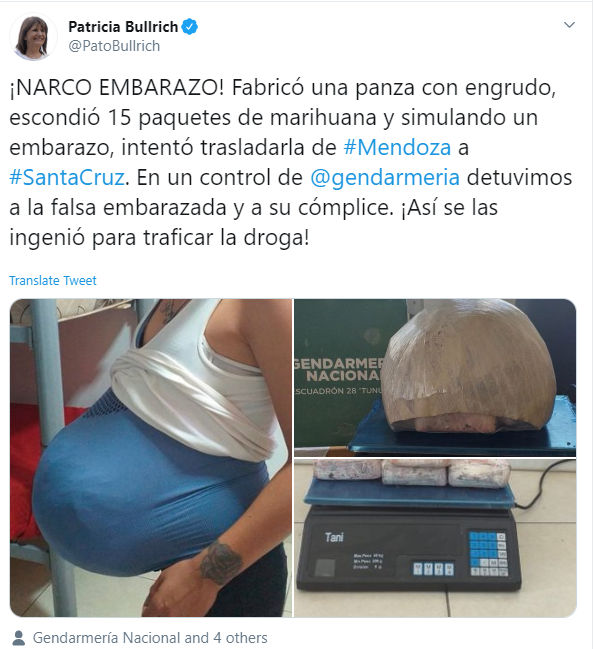 The police officials were first alerted when the male partner was caught with a small bag of weed. It was later when the authorities found out that the woman was not really pregnant but rather had been carrying a synthetic bump and had marijuana bricks stuck with the help of a starch-based paste. The officials later discovered that the women had 15 packets hidden in her baby bump and her partner had two more bricks inside the carry-on luggage. The haul totaled approximately 5.5 kg of cannabis.

This is not the first time a woman has faked a baby bump. A travel writer was recently busted at the Australian airport for faking her baby bump in order to avoid extra luggage. Rebecca Andrews, who is a travel writer, decided to devise a plan in order to avoid paying around $60 as extra luggage charges. She faked her own pregnancy and discussed the incident in one of her articles published on an Escape travel website.

In the article, Andrew discusses the plight of passengers who travel by Jetstar. She said, ‘Their staff [wanders] around with scales at the boarding gate, so you can’t sneak things into your luggage at the last minute because they’ll definitely re-weigh your bags,” due to which several passengers are asked to pay luggage fees even if the luggage is only 2 pounds above the estimated weight.