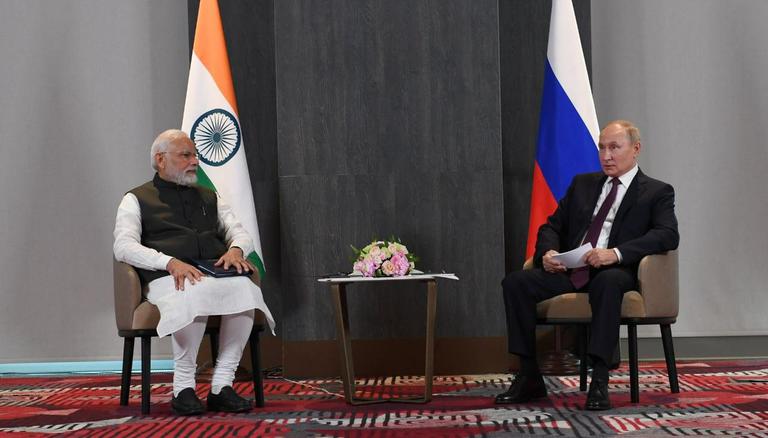 
Prime Minister Narendra Modi held talks with Russian President Vladimir Putin on the sidelines of the Shanghai Cooperation Organization (SCO) in Uzbekistan on September 16. As the war between Russia and Ukraine continues unabated, PM Modi while speaking to Putin asserted that "today's era isn't of war". He, however, thanked Moscow and Kyiv for assisting India in evacuating Indian students from Kyiv.

The statement of PM Modi about war comes as the Russian military offensive in Ukraine continues for more than 200 days. Prime Minister Modi stated that the ties between India and Russia have further enhanced and the two nations have remained with each other for several decades. The two leaders further discussed strengthening the cooperation between India and Russia in various sectors, including trade, energy and defence. They also discussed bilateral and global issues, including the Ukraine situation. PM Modi thanked Russia and Ukraine for helping India in the evacuation of Indian students from Ukraine. He called for finding ways to address the issues of food, fuel security and fertilizers.

"We spoke on the phone several times about India-Russia bilateral relations and also on various issues related to the world. We should find ways to address the problems of food, fuel security and fertilizers. I want to thank Russia & Ukraine for helping us to evacuate our students from Ukraine," he added.

'I know about your position on the conflict in Ukraine': Putin tells Modi

During the meeting, Putin said that Russia is aware about India's stance and concerns about conflict in Ukraine. The Kremlin leader stressed that Russia wants to end the conflict at an earliest. He told PM Modi that Russia will keep India informed about the situation in Ukraine. Putin also invited PM Modi to visit Russia and told him about being aware about his birthday. Kremlin leader said that he cannot extend him birthday greetings in advance as per Russian traditions. Putin said that the ties between both the nations are "developing" and they are "actively cooperating" on international platforms. During the meeting, Putin said, "The relations between India and Russia are developing. They have the nature of strategic priviliged partnership and they continue to develop very rapidly."

"I know about your position on the conflict in Ukraine & also about your concerns. I know that you share these concerns. We want all of this to end as soon as possible but the other party, the leadership of Ukraine has claimed that they refuse to engage in negotiating process. They say that they want to achieve objectives on the battlefield militarily. We will keep you abreast of what is happening there," Putin said.