Priceless Moment: Nobel Prize Laureate Ardem Is All Smiles After The ‘happy News'

Nobel Prize academy on October 4 shared the priceless moment of the Nobel laureate Ardem Patapoutian and his son Luca, after finding out the “happy news” 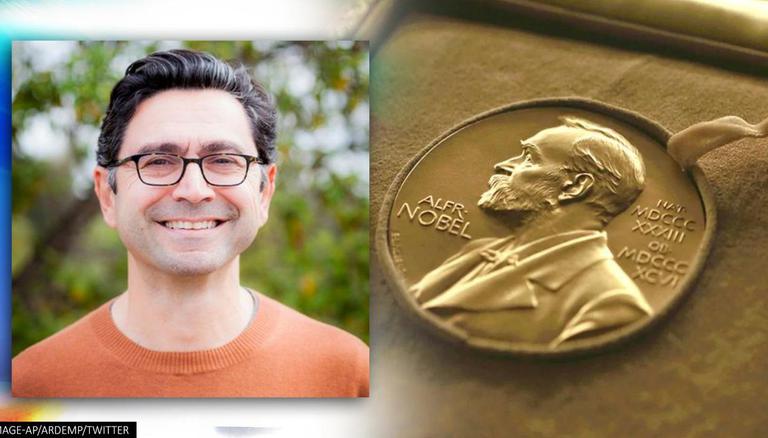 
Nobel Prize academy on October 4 shared the priceless moment of the Nobel laureate Ardem Patapoutian and his son Luca, after finding out the “happy news.” The official Twitter account of the Swedish institution shared the image captured by Nancy Hong while Patapoutian and Luca watched the Nobel Prize press conference in which it was announced that he was one of the two recipients of the 2021 Nobel Prize for Physiology or Medicine. In the image, the scientist and his son can be seen beaming with happiness.

Just in! New medicine laureate Ardem Patapoutian and his son Luca, watching the #NobelPrize press conference shortly after finding out the happy news.

Stay tuned for our interview with Patapoutian coming up soon!

Scientists David Julius and Ardem Patapoutian on October 4 were jointly awarded the 2021 Nobel Prize for Physiology or Medicine for their discoveries of receptors for temperature and touch. The award-giving body on Monday announced the recipients of the prize by the Royal Swedish Academy of Sciences and is worth 10 million Swedish crowns or US$1.15 million. In a statement, the academy said that “Our ability to sense heat, cold and touch is essential for survival and underpins our interaction with the world around us.”

“In our daily lives we take these sensations for granted, but how are nerve impulses initiated so that temperature and pressure can be perceived? This question has been solved by this year’s Nobel Prize laureates,” it added.

The Swedish academy said that one of the awardees, Julius used capsaicin, which is a pungent compound from chilli peppers and includes a burning sensation for the identification of a sensor in the nerve endings of the skin that reacts to heat. Meanwhile, the official release added that Patapoutian utilised “pressure-sensitive cells to discover a novel class of sensors that respond to mechanical stimuli in the skin and internal organs.”

READ | DYK: Rabindranath Tagore's Nobel Prize was stolen from museum with his belongings in 2004

“These breakthrough discoveries launched intense research activities leading to a rapid increase in our understanding of how our nervous system senses heat, cold, and mechanical stimuli. The laureates identified critical missing links in our understanding of the complex interplay between our senses and the environment,” the academy has said.

Learn more about the 2021 #NobelPrize in Physiology or Medicine

The seminal discoveries by this year’s #NobelPrize laureates in physiology or medicine have explained how heat, cold and touch can initiate signals in our nervous system. The identified ion channels are important for many physiological processes and disease conditions. pic.twitter.com/TxMTwSDHas