In a college in Georgia, a professor held a baby for about three hours so that his mother could attend the class. This gesture by Dr. Ramata Sissoko Cisse of Georgia Gwinnett College in Lawrenceville has won the hearts of the netizens across the globe. Dr. Cisse, who is an assistant professor of biology for anatomy and physiology, said to the US media that she held the baby because her mother was struggling to take notes with him on her lap. The student called the professor a night before to tell her that her babysitter was sick and she asked her permission for bringing the baby to her class.

When the Professor held the baby

Cisse said that the student, who is the mother of the child, said that she did not want to miss any class as she did not want to be left behind. The Professor remarked that the student is very sincere, smart and ambitious. She added that the student really wanted to learn. And so when she asked to bring the baby to the class, she agreed. However, when the mother arrived in class with her baby boy, Dr. Cisse noted that she was struggling to write her notes with the baby on her lap. Citing examples from her native place Mali, the Professor said that back there the natives used sheets and other pieces of fabric to securely carry babies on the mother's backs. This fact added to her natural instinct to find a way to secure the baby as she was standing next to a rack with a clean lab coat. Just then Dr. Cisse secured the baby on her back with the lab coat and carried him for three hours as she taught, allowing the mother to concentrate and take notes. Cissé explained that he was cozy and warm, with her body temperature next to him, and the matching heat made it easier for him to relax and sleep. Cisse's daughter, Anna, shared a picture of her mother during the lecture on Twitter. Posted on Friday, the pic has gone viral on the microblogging website. 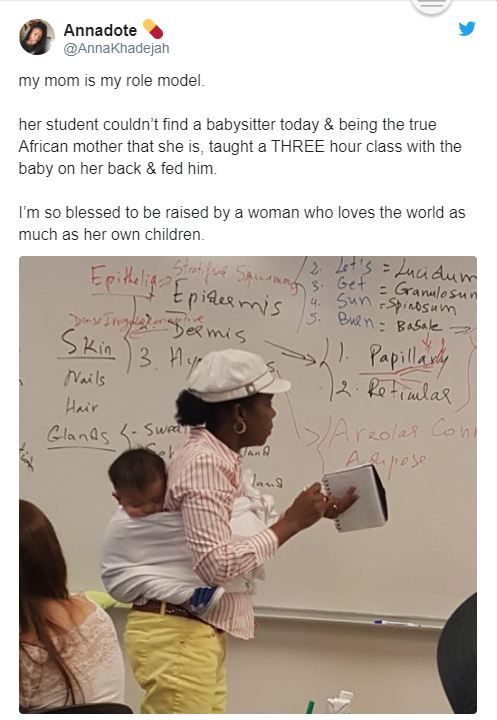 Read: Chef Andres Is On The Ground Helping Whenever Disaster Strikes

Love and compassion are part of the philosophy of her classroom

Dr. Cisse mentioned that after the class, the student e-mailed her to thank, and Cisse wrote back that she will always be there for her. The student then replied that she knows. Cisse as a professor trains a lot of students who go on to become nurses or doctors, or work in other health professions. The Professor explains that teaching them science is only part of her mission to prepare them for life after school, but love and compassion are part of the philosophy of her classroom. She said she hopes that she is able to instill those qualities by modeling them in teachable moments like holding the baby during class as being a good health care provider is about more than just studying textbooks. She hopes they spread love and take it to other people who need it.