Russia's former tax service chief Mikhail Mishustin has been appointed as country's new Prime Minister on January 16. Russian President Vladimir Putin had nominated the low-profile politician who has worked in the government since 1998 and served as the head of Federal Tax Service since 2010. This new appointment came after the country's government was rocked by former PM Dmitry Medvedev's announcement of resignation on January 15.

The new Russian PM, Mikhail Mishustin has reportedly said that Russians must 'feel real changes for the better' and the nation needs to 'restore trust' with business. Members of the Russian Parliament voted in the majority for the appointment of the PM nominee with 383 votes in favour and no opposition votes. However, 41 MP's abstained from voting.

Read - US Calls For Smaller UN Force In Mali, Russia Says No Change 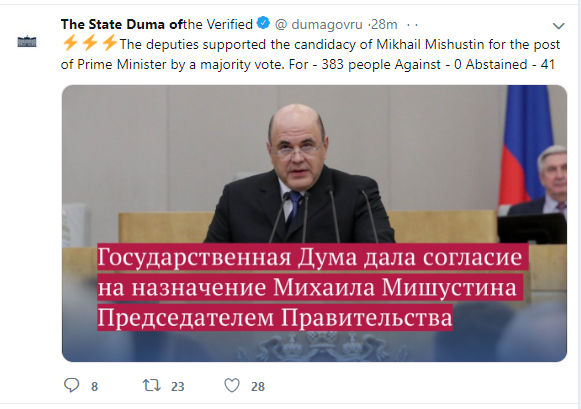 The announcement comes after Putin suggested sweeping changes in the constitution that would have shifted the power from the presidency to Parliament and Prime Minister. Medvedev reportedly met Putin and discussed the address where the latter had suggested the changes. According to media reports, Putin plans to create a ‘Deputy Secretary of Russia’s Security Council’ position and offer it to Medvedev.

Earlier in December, Putin had dropped a hint about his political future post-2024 at a marathon conference where he was in favour of removing the word ‘successive’ from tenure length. As per the Russian Constitution, a President can stay for six years with one successive re-election, which makes it 12 years at stretch.

In 2008, Putin handed over the presidency to his ally Dmitry Medvedev and got back in 2012. Speculations were rife that the Russian President might use the same tactic to return to power but Putin’s hint said otherwise. At the annual conference, Putin said that he had served two successive terms and had the constitutional right to return to the post of the president but this could be “possibly” removed due to objections from political scientists and activists.

Read - Four Gaganyaan Astronauts To Get 11-month Training In Russia