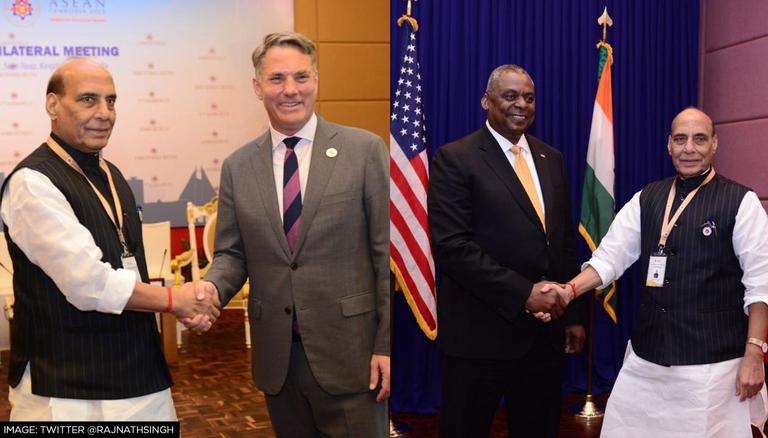 Great to see @rajnathsingh today to reflect on the significant growth of our defence partnership in 2022 and discuss our shared ambitions for future cooperation.

Australia and India are great friends and we share an interest in an open, prosperous and secure Indo-Pacific. pic.twitter.com/ESJulND9zU

Meanwhile, the Australian Deputy PM and Defense Minister Richard Marles revealed via a tweet that the two leaders discussed shared ambitions for future cooperation between Australia and India and reviewed the growth of the defence partnership between the two in 2022. He further stated that the two nations shared “an interest in an open, prosperous and secure Indo-Pacific."

During his visit to Cambodia, Rajnath Singh also held a meeting with US Secretary of Defence Lloyd Austin. Following the meeting, the Indian Defense Minister tweeted, "Delighted to meet the US Secretary of Defence, Mr Lloyd J. Austin in Siem Reap." Notably, the meeting comes amid the long-standing border stand-off with China in India’s Eastern Ladakh region near the Line of Actual Control (LAC). The border contention between the nations flared up in May 2020 following the deadly Galwan Valley clash between the troops from the Indian Army’s Bihar Regiment and the People’s Liberation Army (PLA).

Had a wonderful interaction with the Defence Minister of New Zealand, Mr. Peeni Henare. pic.twitter.com/rAldmCxGI4

India and Cambodia are celebrating 30 years of the establishment of diplomatic ties between the two nations. Defence Minister Rajnath Singh had earlier held a bilateral meeting with Cambodia’s Deputy Prime Minister and Minister of National Defence General TEA Banh, following his arrival in Siem Reap on November 21.

During the meeting, the two leaders noted the shared rich cultural and historic linkages between India and Cambodia. Furthermore, both the leaders recognized Angkor Wat, an ancient temple in Cambodia, as the symbol of the "long-lasting ties" between the two countries, India’s Ministry of Defence said in a press release.