“The Ukrainian crisis has potential to escalate into a pan-European war, if not even a world one,” said Felgenhauer, an independent Russian military analyst.

After Russia’s dire warnings last week that any serious escalation of military conflict in Donbass could ‘destroy Ukraine’, and Moscow’s multiple ceasefire violations near the village of Shumy in Donetsk Oblast on March 29, a military expert in the region has now predicted that the conflict could spiral into a war ‘within four weeks’. Pavel Felgenhauer voiced concerns of a European war as footage of Russia’s recent military build-up circulated, as Moscow deployed more than 4,000 troops close to the rebel stronghold Ukrainian border and annexed Crimea.

“The crisis has the potential to escalate into a pan-European war, if not even a world one,” said Felgenhauer, an independent Russian military analyst, in a recent interview with the Rosbalt news outlet in Russia, cited by The Associated Press. “Will it happen or not? Let’s wait and see. In the West, they don’t know what to do about it,” he added. Felgenhauer’s remarks follow Russia’s warnings to NATO that the country will take ‘military measures’  if NATO troops are dispatched in the tensions-stricken region. As the United States pledged ‘unwavering support’ to Ukraine, Russian fighter aircraft, helicopters, artillery, and army tanks amassed on the border. NATO, meanwhile, warned Moscow against formally deploying military troops into Ukrainian territory as a war-like scene on the Russia-Ukraine border put Europe on high alert. 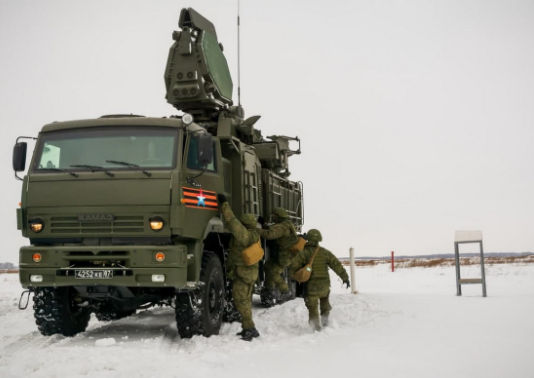 READ | The Russia-Ukraine conflict escalates: Here's what we know so far

Many videos appear on the internet, showing Russian trains and military convoys in Crimea and at the Ukrainian border — yes, again.

We have mapped the alleged locations, which are mostly in Crimea and Russia's Rostov and Krasnodar regions.https://t.co/dufvgIrrM4

Russian President Vladimir Putin has authorized his military forces that are enhancing deployment to encroach parts of the eastern Donbas region in Ukraine, having annexed the Crimean peninsula 7 years ago, which the Biden administration, NATO, and European Union calls an ’illegal Russian takeover’. Moscow signed a treaty that recognized Ukraine’s Crimea as part of the Russian Federation, the referendum however was rejected by the West. Since April 2014, as the Ukrainian armed forces have been leading combat operations against Russia-backed mercenaries in Eastern Ukraine, the relations between Moscow and the West plunged into a post-cold war low.

Ukrainian Foreign Minister Dmytro Kuleba condemned Moscow for a “systemic aggravation” of the security situation in Donbass and Crimea. Kremlin spokesman Dmitry Peskov played down military build-up, saying “this should not bother anyone and it poses no threat to anyone. Russia was taking measures to ensure the security of its own borders," TASS reported.

US asks Russia to 'explain provocations'

As Ukraine and the United States witnessed Russian troops’ increasing movement in the region, Ukraine’s President Volodymyr Zelenskyy accused Russia of ‘flexing military muscle’ and the US state department called for Russia to explain recent provocations and massive troop presence on the Russia-Ukraine border. State Department spokesman Ned Price said at a presser that the United States was ‘ready to engage’ if Russia made efforts to intimidate Ukraine.

“We’ve asked Russia for an explanation of these provocations,” Price told reporters. “But more importantly, what we have signaled with our Ukrainian partner is a message of reassurance,” he said. White House press secretary Jen Psaki, separately told reporters that “recent escalations of Russian aggression and escalation in eastern Ukraine” is “something we’re watching closely”.As tensions mount, Felgenhauer warned that the recent events could see a war in a month as Russia remains undeterred in troop deploying in Voronezh, Rostov, and Krasnodar regions.

On @NATO's 72nd Anniversary we reaffirm the unwavering U.S. commitment to @NATO and Article 5. We're grateful for our Allies, this Alliance, and its critical role in safeguarding our freedom. #WeAreNATO

.@SecBlinken spoke with Ukraine’s Foreign Minister @DmytroKuleba to affirm U.S. support for Ukraine in the face of ongoing Russian aggression and our shared interest in advancing Ukraine’s reform agenda. https://t.co/xctwzdtqvV

WE RECOMMEND
Russian President Vladimir Putin named most handsome man in the country
European Union vows support to Ukraine as Russian military activity escalates on borders
Russian doctors complete complicated heart surgery while hospital was on fire
Russian Open and Indonesia Masters cancelled due to COVID-19
Kremlin to act if US, NATO move near Russian border