Russian MoD Investigating Role Of US In 'creation' Of COVID, Monkeypox Virus

Russia's MoD accused United States of carrying out activities to create drugs that, when introduced into the body for a short time, cause chronic diseases. 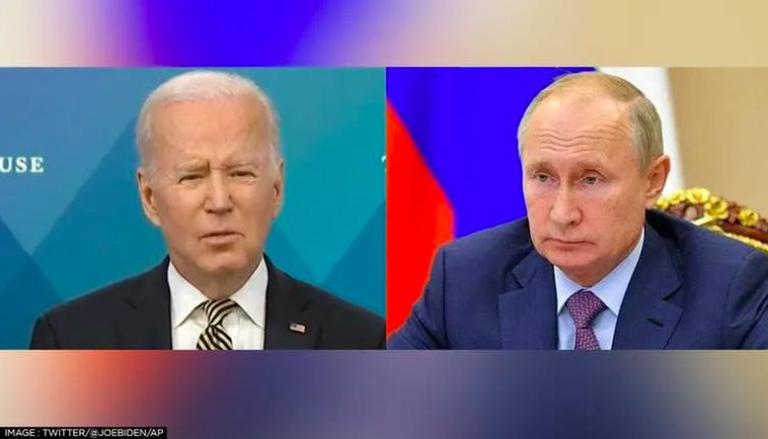 
Russia’s Defense Ministry on Thursday, August 4, announced that Moscow has been assessing whether the United States was behind the research and experiment that leaked the novel SARS-CoV-2 that causes the COVID-19 disease as well as the monkeypox virus as several Pentagon-operated Biolabs were discovered in Ukraine. It is possible that the US Agency for International Development (USAID) was behind the creation of the COVID-19 virus that claimed millions of lives worldwide.

Speaking at a presser, the head of Russia’s Radiation, Chemical and Biological Defense Forces, Lieutenant-General Igor Kirillov, claimed that during the course of Moscow's special military operation in Kyiv, its troops found documents indicating that since 2019 USAID and its main contractor, Labyrinth Ukraine, have been participating in the US military biological program.

"I would like to note that within the framework of the US Department of Defense program to reduce the biological threat, one of the areas of research at Labyrinth Global Health was the study of coronaviruses and the monkeypox virus," said Lieutenant-General Igor Kirillov.

On July 23, the World Health Organization (WHO) declared the outbreak of monkeypox a global health emergency. The contagious disease has now spread to as many as 76 states and there are now more than 26,000 patients, Russia's MoD reminded. There were official communication documents retrieved between the head of the sanitary and epidemiological department of the Armed Forces of Ukraine and the director of the company "Labyrinth Ukraine" Karen Sailors about such experiments from the US-operated bio lab, Russia's Lieutenant-General Kirillov stressed, sharing the evidence. READ | Russia-Ukraine war: Relatives of POW's captured by Moscow call for information on loved ones 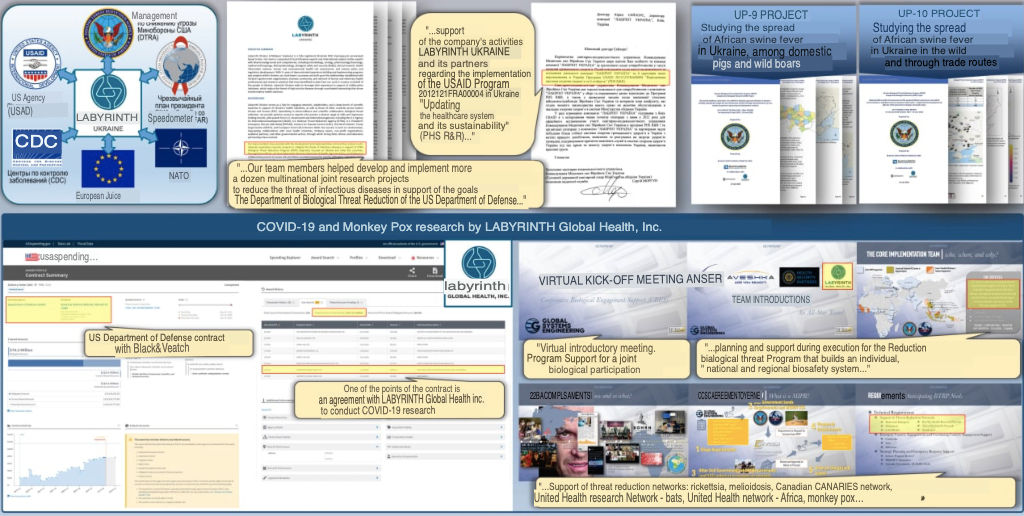 Russia had been expressing growing concerns about the activities of Ukrainian biological laboratories, and the US Agency for International Development as the coordinator of the biological weapons research said Russian MoD. US defence department is now attempting to avoid accusations of developing biological weapons in Ukraine, it added.

According to Russia's defence ministry, the firm named Labyrinth Ukraine is a division of the American company Labyrinth Global Health, and its founders are former employees of Metabiota, a key contractor of the Pentagon in the field of military biological activities. "Labyrinth Ukraine took part in the U-Pi-9 and -10 projects, during which the spread of African swine fever in the territory of Ukraine and in the countries of Eastern Europe was studied," said the head of Russia’s Radiation, Chemical and Biological Defense Forces, Lieutenant-General Igor Kirillov. He furthermore added, that the pathogens that "fall into the zone of interest of the Pentagon" further become pandemic, with American pharmaceutical companies and their patrons, the leaders of the US Democratic Party of which President Joe Biden is a part, becoming the beneficiaries and cashing profits. 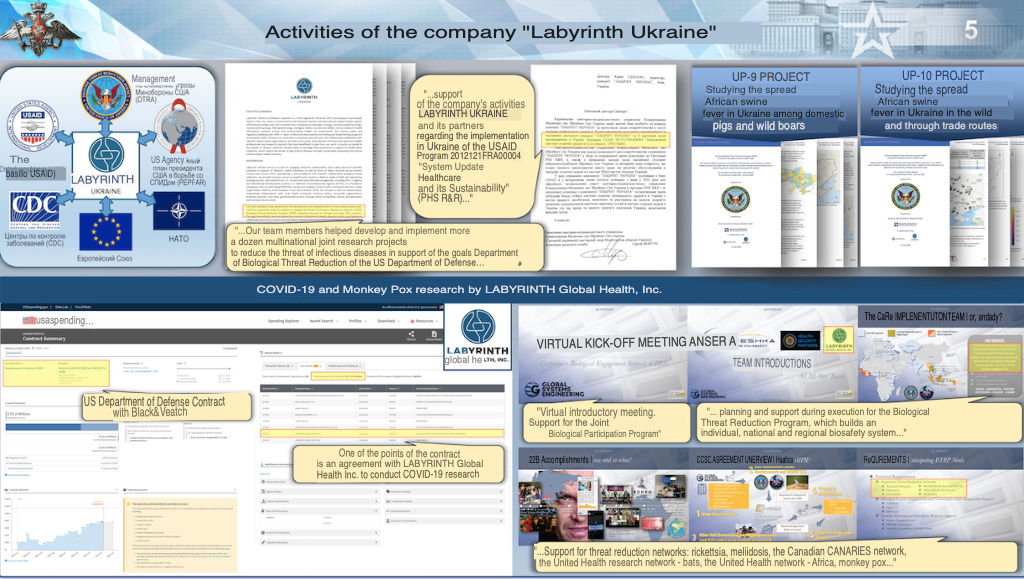 Russia's MoD cited what it described as "the American military biological dossier" from the 1997 Cuban War when the Cuban government made similar revelations that the United States had violated the international Convention on the Prohibition of Biological and Toxin Weapons by conducting dangerous pathogens research in the military Biolabs.  "The accusation was based on the testimony of a Cuban pilot who recorded the fact that a quarantine biological agent, palm thrips, was sprayed from an American plane, capable of damaging one of Cuba's key agricultural sectors," said Russia's MoD.

Despite the fact that it was possible to initiate an extraordinary meeting of the Biological Weapons Convention (BWC) member states on the issue, the investigation was not carried out, Russia asserted. "This was due to the absence of the control mechanism of the Convention, on the establishment of which the Russian Federation insists." Russia believes that the US used bioweapon to topple the government in Latin America.

On July 18, 2022, the President of the Republic of Venezuela, Nicolas Maduro, publicly announced the involvement of the United States in the assassination of the former head of state Hugo Chávez. As per the Venezuelan investigations, the US intelligence agencies had been working on possible ways to eliminate the Venezuelan leader, who pursued an active anti-American policy, Russia stated.

"United States carried out activities to create drugs that, when introduced into the body for a short time, cause chronic diseases and provoke the development of various forms of cancer," claimed Russian MoD.

Russia's Ministry of Defense claimed that according to the Venezuelan government, US officials used a similar drug to poison President Hugo Chávez. This drug was given to the anti-American president by Claudia Diaz, who was part of the presidential entourage. The data of the forensic medical examination and the testimonies of the Cuban doctors who treated Chavez about the atypical course of the disease and its resistance to the use of drugs confirmed the same, according to Russian MoD. 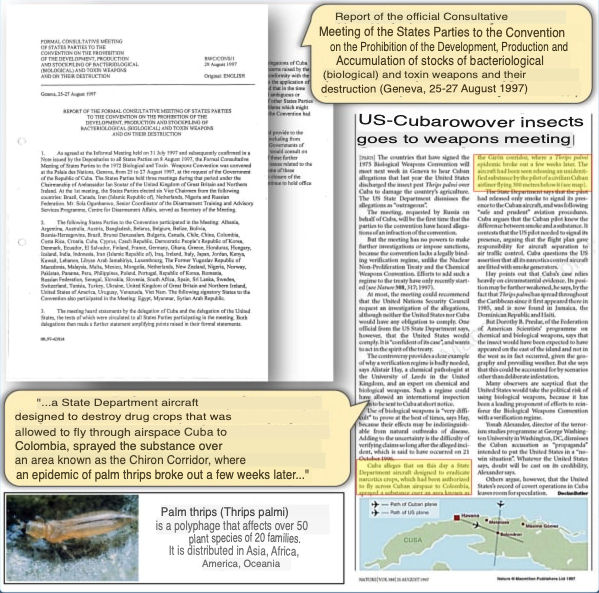 "With the assistance of American intelligence agencies, she left Venezuela and was subsequently taken to the United States in order to avoid possible publicity of the details of her cooperation with American intelligence agencies," Russia iterated, accusing US of using bioweapon. It continued that the Eurasian Economic Union had, in fact, adopted a resolution to close such biological facilities. Later, the states in which America conducts dual-use research were invited to sign a collective appeal of cooperation with the United States. This included bolstering cooperation "solely for the purpose of strengthening global health security and reducing the impact of infectious diseases on the population," as per the documents shared by Russia's MoD.

"Countries that show loyalty to the American initiative are expected to receive additional funding under the Biological Threat Reduction Program," Russia claimed.