In what could be described as an elephant rampage, a religious procession in Sri Lanka went out of hand when an elephant went berserk on the crowd, injuring 18.

In what could be described as an elephant rampage, a religious procession in Sri Lanka went out of hand when an Elephant went berserk and injured 18 people. The incident happened in Kotte near the capital of Sri Lanka Colombo on September 9. The video is about forty-seconds long and shows the exact moment where the animal charged towards the crowd and the confusion which ensues in the commotion. The whole incident was caught on tape and has gone viral on the internet.

What is in the video?

The video shows an elephant decorated for a religious procession suddenly runs ahead, injuring the people who were in close proximity with the animal. The elephant rider who was later seen falling down from the animal's back, escaped narrowly as the animal charged ahead. The video also shows people running to save their lives. Officials from the hospitals where the injured were admitted said on September 9 that there are 18 people who had received treatment and that 16 have already been discharged. As far as the remaining two are concerned, one of them is under observation for abdominal damage and other for an ear injury.

READ: Mumbai Rains Didn't Cause This Viral 'waterfall', Here's What Did

Elephants decorated with ornaments are a major attraction and tradition in Sri Lanka's Buddhist and other religious events. Wealthy families own elephants as a symbol of prosperity, pride, and nobility and send their elephants in spectacles that are held around the country. Some temples where Buddhism is practiced also own elephants.

The incident has gone viral after it was captured on tape, the forty-second video has been uploaded by many on the video streaming platform of YouTube. The users commented with all kinds of comments but mostly out of concern for the elephant. "When will the human-ape stop abusing the animals?...good for the elephant, I think It made its point!." "Must be because of those fast n furious led lights on the face that shocked it" commented another user. 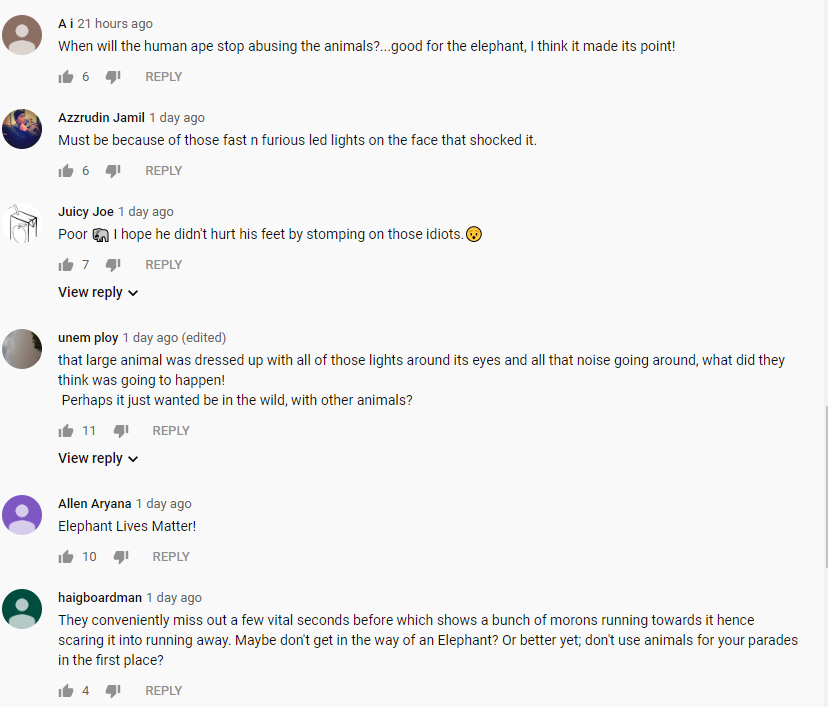