Thai Prime Minister Prayut Chan-o-cha was fined for not wearing a face mask in public while attending a meeting at the Government House to discuss situation.


Thai Prime Minister Prayut Chan-o-cha on April 26 was fined for not wearing a face mask in public while attending a meeting at the Government House to discuss the COVID-19 situation in the country. On Monday, the Thai PM explained on Facebook how his government is pushing to secure more COVID-19 vaccines and posted a photograph of the meeting that showed him along with several advisers. However, all officials were wearing facemasks except the country’s Prime Minister. 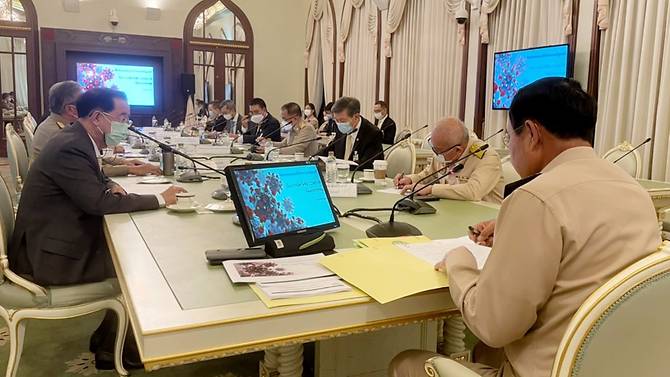 The image of the meeting has now been deleted due to intense backlash and widespread criticism. However, the ministers convened after Bangkok governor Aswin Kwanmuang had reminded residents to put on masks amid COVID-19 from Monday, if not, they will be fined up to 20,000 baht or US$640. Following Thai PM’s Facebook post and backlash against Prayut, Aswin posted on his Facebook page that the prime minister has been fined 6,000 baht (US$190) for not complying with the rules.

Aswin wrote on Facebook, “After the meeting, the prime minister asked me as the governor of Bangkok to investigate if the case is wrongdoing. I informed him that his action violates the announcement by the Bangkok Metropolitan Administration which ordered people in Bangkok to wear surgical masks or cloth masks anytime they leave their residence.”

“Later, I travelled to Government House with the Metropolitan Police chief and inspectors from the Dusit police station,” he added. “The prime minister agreed to be fined.”

Thailand has been trying to procure at least 35 million more vaccine doses in 2021 to boost its vaccination drive by 50 per cent in order to reopen the country completely for tourists. Thailand’s Ministry of Public Health revealed that the country ordered 63 million doses of the cost-effective coronavirus jabs to inoculate the population and achieve national herd immunity. It is now aiming to procure more supply for achieving its goal of vaccinating the entire population within 2021, the local newspaper Bangkok Post reported.

READ | Thailand aims to boost COVID-19 vaccines by 50% with aim to boost tourism sector
READ | Laos locks down capital over virus outbreak tied to Thailand
READ | Thailand imposes fines of up to $640 for not wearing masks
First Published: 26th April, 2021 21:34 IST
SUBSCRIBE TO US