President of Turkey, Recep Tayyip Erdogan announced on October 9 that the Turkish Armed Forces along with the Syrian National Army has launched the Operation Spring of Peace in northern Syria in order to clear out the “ISIS terrorist organizations”. According to President Erdogan, the goal is to eliminate the “terrorist corridor”, the southern border of Turkey to re-establish peace and security. Moreover, this military operation after the American troops were dislocated from north-east Syria, will also help in eliminating the “threat of terrorism” directed at his country. 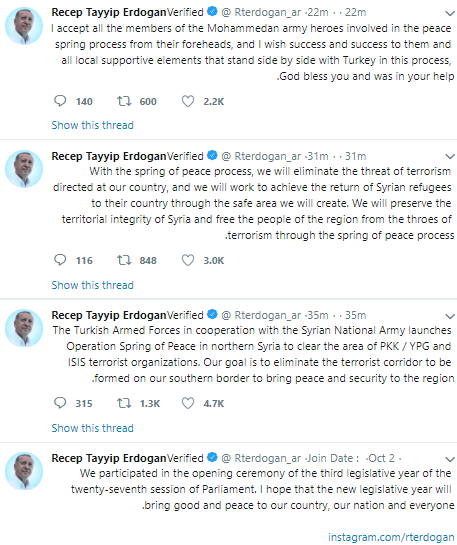 Few hours before President Erdogan announced the launch of the military operation, the President of United States, Donald Trump took on Twitter to declare that US involvement in middle-east was the “worst decision ever” made in history. Furthermore, going into the disputed area has “endless wars” and the ”slow and careful” retraction of the US troops from Syria has at least ended the wars for his country. However, Donald Trump's decision has also been heavily criticised by other US leaders as the Syrian Kurds had supported America in their fight against IS militants.

The United States has spent EIGHT TRILLION DOLLARS fighting and policing in the Middle East. Thousands of our Great Soldiers have died or been badly wounded. Millions of people have died on the other side. GOING INTO THE MIDDLE EAST IS THE WORST DECISION EVER MADE.....

Uncoordinated with the US

Reportedly, according to a US official, the airstrikes launched in Syria by Turkey are uncoordinated with the US military. These attacks are expected to be dangerous for the coalition forces along with the civilians. Moreover, Turkey has been massing troops for several days during the preparation of the military operation to attack the Kurdish fighters in northeastern Syria that Ankara addresses as a terrorist organization. A spokesperson for the US-backed and Kurdish-led force in Syria reportedly said that Turkish warplanes have even started targetting the civilian areas. The Syrian Democratic Forces member, Mustafa Bali has also said that the airstrikes have caused a panic among the people.