Robert Malone, the inventor of mRNA vaccines had tweeted a video explaining from the data about the harms from the Pfizer vaccine, & the problems with it. 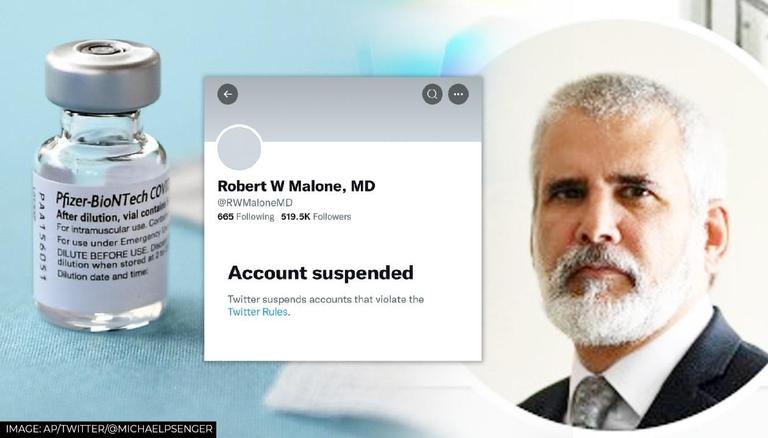 
In an eerie turn of events, microblogging site Twitter suspended Dr Robert Malone the inventor of the mRNA COVID-19 vaccines for posting a video that explained harms feared from the virus vaccine Pfizer. Slamming the social media website over its actions, Indian lawyer and activist Prashant Bhushan described the situation as 'Just Vax propaganda'. Speaking in Spanish, Dr Robert Malone, from another Twitter page explained why his account was permanently blocked.

'This is the level of censorship on Twitter!' tweeted lawyer Prashant Bhushan.

Dr Robert Malone the inventor of the mRna vaccines tweeted a video explaining from the data about the harms from the Pfizer vaccine, & the problems with its clinical trials. For this @Twitter suspended his account! This is the level of censorship on twitter! Just Vax propaganda pic.twitter.com/WsCozsbfQT

The mRNA technology investor is stressing children's safety and has been saying, "No parent should kick their children without first seeing the warnings of Robert W. Malone." In a tweet, it has been said that his Twitter account has been suspended because he has been warning of dangerous adverse effects for months.

Earlier, in November a White House statement had announced that the US will commence its vaccination programmes for kids between ages 5 and 11 years with clearance to the Pfizer/BioNTech shots. The team belonging to the Centers for Disease Control and Prevention (CDC) deliberated upon the same, discussing at length whether the jabs would be beneficial to all 28 million children in the country. A final recommendation from the body came hours after, giving a final clearance to the Pfizer/BioNTech vaccines.

Prior to this, in October, the United States Food and Drug Administration (FDA) had authorised the use of Pfizer-BioNTech’s COVID-19 vaccine for children ages 5 to 11. The FDA, at that time, had noted the immune responses of children between the age of 5 and 11 were compared with those of individuals 16 through 25 years of age. The Pfizer-BioNTech shots have shown 90.7% efficacy in preventing COVID-19 in children aged 5-11. The Food and Drug Administration said that it studied the vaccine safety in approximately 3,100 children among the same age group of 5 to 11 “and no serious side effects have been detected in the ongoing study.”

READ | US: Pfizer's COVID-19 treating pills get FDA authorisation for emergency use

Recently, in December, Pfizer had informed that it was changing plans and testing three doses of its COVID-19 vaccine in babies and preschoolers instead of the usual two. The addition of an extra dose had come after a preliminary analysis found 2 to 4-year-olds didn't have as strong an immune response as expected to special low-dose shots. Pfizer had planned to release data from its study of children under 5 by the end of the year. It's not clear how this change will delay the quest to vaccinate the youngest children.

WE RECOMMEND
COVID-19: Pfizer to test third dose of vaccine for children below 5 yrs amid Omicron scare
Pfizer plans to manufacture updated vaccine against Omicron; 'can be built in 100 days'
US CDC to take call on authorising booster shots for 12-15-year-olds in 'weeks ahead'
Pfizer says COVID-19 pandemic could extend up to 2024, vaccine data for young kids delayed
South Korea approves of Pfizer's Paxlovid antiviral pill for emergency use to fight COVID