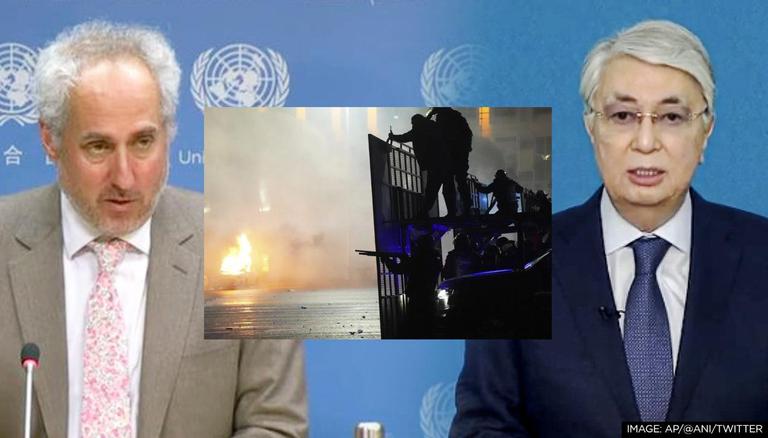 
As the unrest in Kazakhstan has led to huge protests due to fuel price surges, The United Nations has voiced concerns about the turmoil in the nation and has called for restraint. UN spokesperson Stephane Dujarric said, "We are obviously following with concern and are monitoring the situation in Kazakhstan," Xinhua reported.

The UN spokesperson went on to say that he believes it is crucial for all parties who are involved in the present events of conflict to display restraint, avoid violence, and support conversation in order to solve all of the present problems. Stephane Dujarric further noted that the UN has a country office and other officials in Kazakhstan, and amid the violence, the UN personnel have not faced any security threats.

Kazakhstan President intends to "act as tough as possible"

As the environment in Kazakhstan grows very stressful, President Kassym-Jomart Tokayev declared on Wednesday that he intends to "act as tough as possible."

On January 5, he signed a presidential order accepting the Kazakh government's resignation. As per media reports, hundreds of protestors flooded the streets of the nation for four consecutive days on Wednesday to denounce the growing price of liquefied petroleum gas (LPG), forcing the nation's government to resign.

In retaliation to the massive disturbance, the administration proclaimed a state of emergency, but protestors turned violent, assaulting government buildings and seizing police vehicles. In addition, Kazakhstan is currently suffering from a complete internet shutdown after Kazakhtelecom, the country's biggest telecommunications company, cut off internet access on Wednesday afternoon. Because Kazakhstan exports oil and natural gas, the substantial price hike had upset Kazakhs.

Furthermore, after Kazakhstan President Tokayev's call for assistance to the Collective Security Treaty Organization (CSTO) member nations, it was announced on the night of January 5 that "peacekeeping forces" from a Russia-led military alliance would be dispatched to Kazakhstan to support Tokayev in reclaiming control.

As per Armenian Prime Minister Nikol Pashinyan, the CSTO, which comprises Russia, Armenia, Belarus, Kazakhstan, Kyrgyzstan, and Tajikistan, would send troops to achieve stability in the Central Asian country.