The South Korean and US defence chiefs met for their annual talks, as Washington pushes to reinforce alliances with its partners to curb mounting challenges. 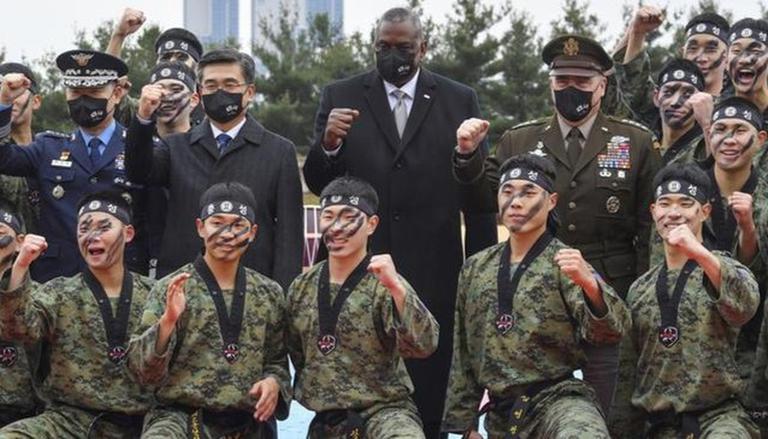 
As Washington pushes to strengthen relations with its partners to curb mounting challenges, the US defence chief met his South Korean counterpart in Seoul on Thursday, reported AP. Notably, the meeting came at a time when China and North Korea tested nuclear missiles despite several warnings of sanctions. After holding a high-level meeting, US Defence Secretary Lloyd Austin said that the Biden administration will counter China's aggression and its potential military threats in Asia. Though it is expected that the meeting will profer some "concrete" results but some experts say the alliance still faces challenges due to Seoul's historical disputes with Japan. In addition, South Korea hesitate to join US-led initiatives targeting China.

"The US-ROK Alliance is the linchpin of peace and security in this region and we will work together as we move toward a #FreeandOpenIndoPacific," US Defence Secretary Lloyd Austin tweeted upon arrival in South Korea on Wednesday.

Notably, he was referring to a regional initiative aimed at countering China's growing assertiveness in the region. It is worth mentioning Pentagon released the results of a global posture review that directs additional cooperation with allies and partners to deter "potential Chinese military aggression and threats from North Korea".

As per the report, the initiatives include exploring more comprehensive regional access for military partnership activities; strengthening infrastructure in Australia and the Pacific Islands; and planning rotational aircraft deployments in Australia, as announced in September. During the meeting, Seoul called the review a sign that both South Korea and the US highly value the alliance.

Last month, a US-sponsored show of alliance with South Korea and Japan blundered after American negotiators couldn't convince their Asian allies to share a news conference stage following their meeting in Washington due to what Seoul called a row over islets claimed by both South Korea and Japan. "Washington is also looking for Seoul to do more beyond the (Korean) Peninsula, which would involve trilateral cooperation with Japan despite tensions over history, and contributing to Asia's maritime security despite objections from China," AP quoted Leif-Eric Easley, a professor at Seoul's Ewha University as saying.

WE RECOMMEND
South Korea reconsiders plan to host UN peacekeeping conference amid concern over Omicron
Russia orders US diplomats to leave by January 31 in retaliation amid escalating tensions
Russia says US shouldn't pretend to be a beacon of democracy amid domestic challenges
South Korea, US in final stage negotiations over end-of-Korean War declarations: Min Lee
US, South Korea defence chiefs discuss boosting alliance