Vatican To Hold Easter Celebrations Without Any Gathering Amid Coronavirus Scare

The Vatican authorities have said on Mar 15 that its traditional Easter week celebrations would be held this year without worshippers amid coronavirus outbreak.

The Vatican authorities have said on March 15 that its traditional Easter week celebrations would be held this year without worshippers due to the unprecedented outbreak of coronavirus. The Prefecture of the Pontifical Household said in a statement that all celebrations of the Holy Week would take place “without the physical presence of the faithful”. It is the office which is also in charge of the coordination most of Pope Francis's public schedule and his audiences with heads of state and other dignitaries.

According to the latest tally, as of March 15, Italy has reported 21,157 confirmed cases of COVID-19 with 1,441 deaths while the global death toll has surpassed 5,800. The Vatican also added that until April 12, the general audiences and the Angelus presided over by the Holy Father “will be available only in live streaming on the official website” of the Vatican news. So far, Italy is that hardest-hit country wit the fatal virus in Europe. Just last week, Vatican had also confirmed its first positive case of COVID-19. 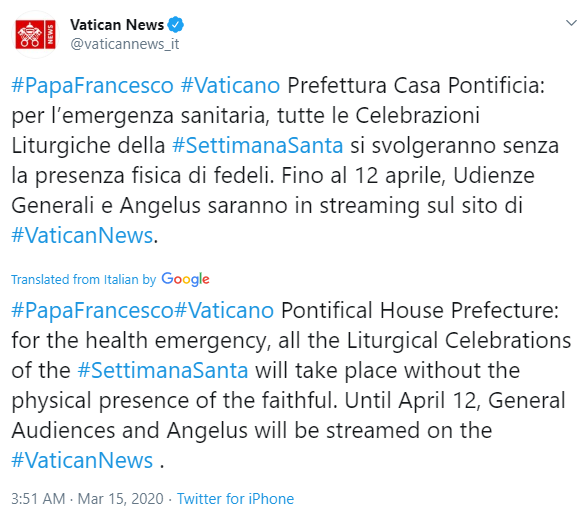 The World Health Organisation (WHO) has declared the coronavirus as a global pandemic after the virus spread to more than 152 countries, resulting in the deaths of more than 5,800 people worldwide. WHO chief Tedros Adhanom further even urged all nations to get very serious over the issue and take all necessary measures to contain the virus from spreading at this rate. Tedros said, that the word 'Pandemic' cannot be used lightly or carelessly due to its strong connotation.

However, Tedros also said that the coronavirus outbreak is a "controllable pandemic". According to a statement released by the World Health Organisation, Tedros outlined two main reasons as to why the decision was taken to describe the epidemic as a pandemic. Tedros said that one reason was the speed and scale of transmission and the others was because 'countries are not approaching this threat with the level of political commitment needed to control it'.

First detected in the city of Wuhan, in Hubei Province of China, the coronavirus outbreak has disrupted many lives since December 2019. As per reports, the total number of confirmed cases within China has reportedly hit 80,849 and at least 156,930 cases worldwide. According to reports, the death toll in China has also surpassed 3,190 and the National Health Commission also confirmed more than 25 new cases on March 15. The death toll due to the deadly virus across the world also mounted to over 5,839.