European Commission President Ursula von der Leyen will next week make a recommendation on whether Ukraine should be given a candidate status in the bloc. 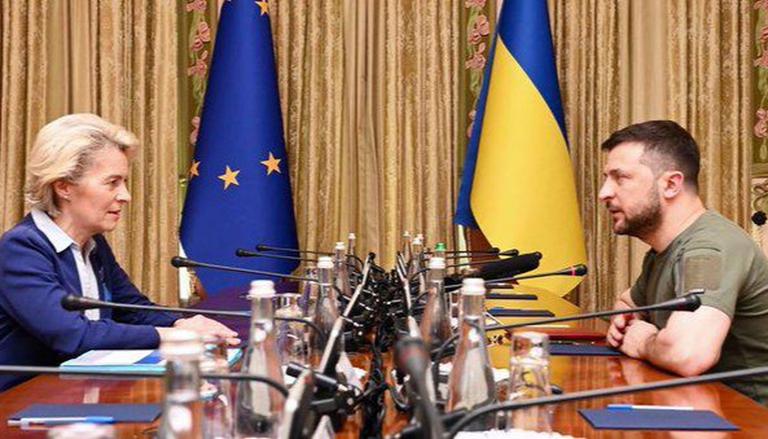 
European Commission President Ursula von der Leyen will next week make a recommendation on whether Ukraine should be given a candidate status in the bloc. On Saturday, Leyen, who serves as the chief executive of the European Union, made a surprise visit to the Ukrainian capital Kyiv wherein she said that country has already done a lot to gain candidacy but there were still reforms to be made. Addressing media reporters alongside Ukrainian President Volodymyr Zelenskyy in Kyiv, she said, “we (EC) want to support Ukraine in its European Journey.”

It is pertinent to note that such a recommendation from von der Leyen would mark a preliminary step on a long road to full membership. Ukraine needs the approval of all 27 members of the bloc to complete the process of accession. While most of the member states have shown affirmation of the application, the decision by western EU countries including France and Germany remains sceptical.

I was glad to end my visit with a walk on the Maidan.

I’m so touched to see life back in the streets of Kyiv.

They are slowly coming back to their busy pace.

This is a symbol of hope for this brave country. pic.twitter.com/awjAwZ4Vx2

Notably, the European leader’s remarks came as she made her second visit to Kyiv amidst Russia's war on Ukraine. “The discussions today will enable us to finalise the assessment by the end of next week,” von der Leyen said underscoring a meeting with Ukrainian officials. Standing alongside, Ukraine's embattled president said that his country's accession to the bloc will determine the future of Europe, which was the actual target of Putin's forces.

“It is now being determined what the future of a united Europe will be, and whether there will be a future at all. A positive response from the European Union to the Ukrainian application will signify a positive answer to the question of whether the European project has a future at all,” he said.“All of Europe is a target for Russia, and Ukraine is just the first stage in this aggression,” Zelenskyy added.

The @EU_Commission is preparing ⁰our recommendation for EU Member States.⁰⁰My discussions today with @ZelenskyyUa and @Denys_Shmyhal will enable us to finalise our assessment.⁰⁰The path is known.

I appreciate the efforts and determination of Ukraine in this process. pic.twitter.com/wBJmOJ2P5x

Just a day ago, Deputy Prime Minister for European Integration of Ukraine Olga Stefanishyna had said that three European Union members opposed Ukraine’s accession to the bloc. On Thursday, she reckoned that a total of seven nations have suggested alternative options for her country’s EU candidacy, out of which, three have completely refused to approve the membership. Soon after Russia launched its ‘special military operation’ on Ukraine, Zelenskyy filed an application for the country to become a member of the EU. However, even after weeks, there is little progress recorded.