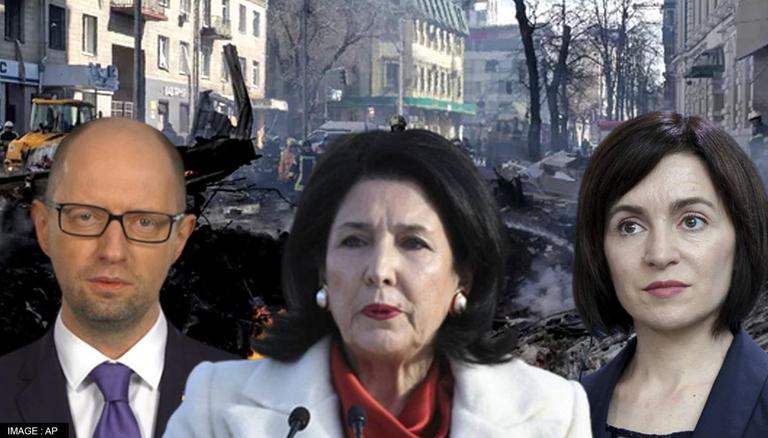 
As the war between Russia and Ukraine intensifies, the former Prime Minister of the war-torn nation, Arseniy Yatsenyuk believes that Georgia's and Moldova's efforts to maintain 'neutrality' in Russia's conflict against Ukraine are 'wrong'. During an interview with Radio Free Europe, Yatsenyuk has characterized the attempts of the governments of other former Soviet republics Georgia and Moldova, among European Union non-members or aspiring members, to be neutral in the present dispute as "just wrong, period".

According to a Radio Free Europe report, when Russian forces stormed across Ukraine's frontiers nearly two months ago, both Georgia and Moldova formally sought EU membership, expediting their respective bids.

Further, Arseniy Yatsenyuk said in the interview, “They know the Russian playbook. We all shared the same values." He went on to say, “And in these dramatic and challenging times, it was so important for the Ukrainian people, and for the people of Georgia and Moldova, to show real unity, to stay as one united front, to impose sanctions against Russia. If Ukraine fails, both Moldova and Georgia will fail,” Radio Free Europe reported.

Arseniy Yatsenyuk had predicted that Russia will "lose this war"

In addition to this, earlier in the month, the former Ukrainian Prime Minister had predicted that Russia will "lose this war". Yatsenyuk told CNN that Russian President Vladimir Putin's fight is "against the free world," and that he looks to be operating without "any recourse" at the moment. He also urged for the formation of a joint investigation group to bring Putin to justice. According to media reports, the prime minister said, “I still believe that Putin will lose this war”.

Yatsenyuk asserted that the current crisis in Ukraine is the "most dramatic" occurrence since the second World War. Yatsenyuk had even joined the chorus of international condemnation, accusing Putin of war crimes in Ukraine. He had also highlighted the fact that this is not simply a catastrophe, however, these are crimes against humanity. “Everything that Putin and his cronies and his soldiers so-called did to Ukrainian people, this is war crimes and crimes against humanity,” he said.

Apart from this, Yatsenyuk argued that the "ultimate question is what happens to Putin" and his army once the fight is over, citing the rising crimes in the aftermath of the ongoing war. He further asked how they would bring Putin, every other officer in the chain, and every soldier who perpetrated these crimes against the Ukrainian people to justice individually.

READ | Italy believes natural gas supplies from Russia to EU may be cut off in May: Report

Yatsenyuk also claimed that Putin's reign will end "in failure" at some point. According to media reports, he ended by advocating for the urgent establishment of a joint investigation into Putin's aggressive activities in Ukraine.