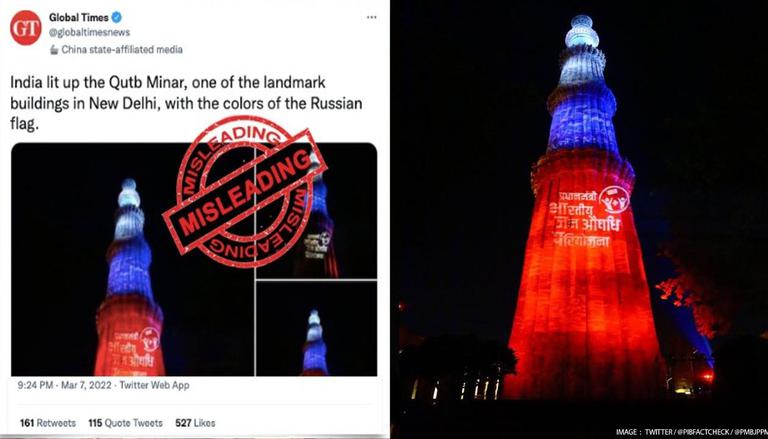 
The Chinese state media shared misleading news about India lighting up Qutub Minar in Russian flag colour amid the ongoing Ukraine Russia war. Chinese state-affiliated media Global Times on Monday shared images of the monument from an earlier event to share fake news. The Qutub Minar monument was in fact lit up to mark 2022 Jan Aushadi Diwas. Taking it to its official Twitter handle, Global Times claimed that India lit up Qutub Minar in Russian flag colours as a sign of support.

Taking to its Twitter handle, Global Times wrote, “India lit up the Qutb Minar, one of the landmark buildings in New Delhi, with the colours of the Russian flag.” Following this, the media group suffered major backlash as Indians flooded the post to mark it fake. In reality, the media group that acts as the China government’s mouthpiece had shared an older image of Qutub Minar from March 5, when it was illuminated in colours to mark the fourth year of Jan Aushadhi Diwas, which is celebrated every year on March 7 under Pradhan Mantri Bharatiya Janaushadi Pariyojana (PMBJP). The official Twitter handle of PMBJP had shared multiple images of the monument in various colours including that was shared by the Chinese media. Sharing the images on March 5, it had written, “Historical Monument of our Country, Qutub Minar illuminates on the occasion of Jan Aushadhi Diwas 2022. This great moment captured in the camera will leave mark in the history.”

.@globaltimesnews has claimed in a tweet that Qutub Minar was lit up with the colours of the Russian flag.#PIBFactCheck

Following the development, the PIB that fact-checks information shared also countered the Global Times’ post and dismissed claims. Marking the post as misleading, PIB wrote, “Global Times has claimed in a tweet that Qutub Minar was lit up with the colours of the Russian flag. This claim is misleading. Qutub Minar was illuminated as a part of the #JanaushadhiDiwas2022 celebrations.” Following this, the post was taken down by the Chinese media.

The Pradhan Mantri Bhartiya Janaushadhi Pariyojana is a central government campaign launched by the Department of Pharmaceuticals to provide quality medicines at affordable prices to the masses. Speaking about the initiative on Monday, Prime Minister Narendra Modi said the poor and the middle class have benefitted from the service provided by 'Jan Aushadhi Kendras'. These Kendras were set up to provide generic drugs at affordable prices that have managed to save crores of rupees on medicines for the beneficiaries.

WE RECOMMEND
Ukrainian women join Army to fight against Russia after peace talks fail to yield results
Russia-Ukraine war: 'Over 1.7 million flee Ukraine since Russian invasion,' confirms UNHCR
Russia accuses US of fueling biowarfare in Ukraine; claims to have 'evidence of operation'
Russia Ukraine war: EU seeks China's intervention due to its 'rock solid' ties with Moscow
Russia approves list of countries who took 'unfriendly actions'; UK, US on radar