French President Emmanuel Macron, on Thursday,said that the European Union( EU) is working on an alternate export route for food grains stuck at Ukrainian ports 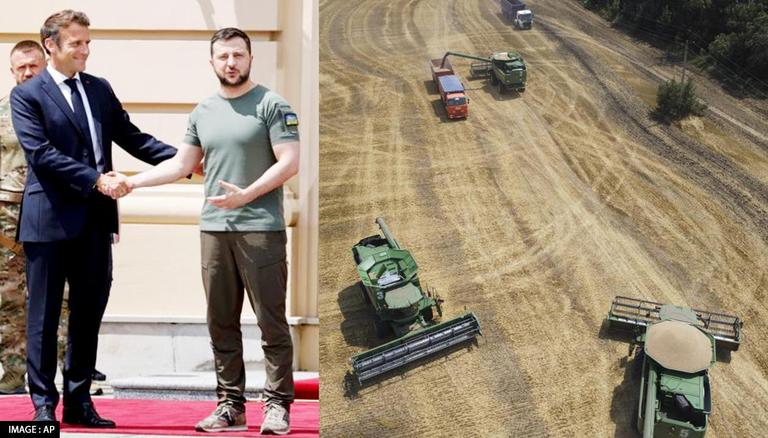 
French President Emmanuel Macron, on Thursday, said that the European Union (EU) is working on an alternate export route for food grains stuck at Ukrainian ports. Speaking to French media outlet TF1, he detailed that the new channel is being carved out through Romania, which he said was just a  “few tens of kilometres” from Odesa. Soon after the war started, invading troops imposed a blockade on Ukrainian ports-particularly Odesa and Mariupol- leading to tonnes of grains and other agrarian products getting stuck there.

Macron called on Moscow “to accept that the United Nations organise the export of cereals, which requires the lifting of the Russian blockade on Ukrainian ports and provide all security guarantees for Ukraine to allow the exit of these cereals.”

The global food crisis we are experiencing is the direct consequence of the war waged by Russia against Ukraine. We call on Russia to allow the UN to organize grain exports by lifting the blockade on Ukrainian ports.

Meanwhile, Macron revealed that the grains would be transported through the Danube river and then into the railways. The Danube is the second-longest river in Europe, originating in Germany and flowing through Romania and Ukraine before merging into the black sea. Previously, Macron had blamed Russian invasion for the global food crisis. Macron, who met Ukrainian President Volodymyr Zelenskyy in Kyiv, on Thursday, also reaffirmed his support for Ukraine's membership of the European Union.

"Ukraine is part of the European family. Together with my German, Italian and Romanian partners, by supporting Ukraine's status as an immediate candidate for European Union membership, we confirm this to President Zelensky," he said in an online tweet.

Since the start of the war, the ‘invading’ troops have launched several attacks and imposed a blockade on Ukrainian ports-particularly Odesa and Mariupol- both serving as the war-torn country’s prime outlet to the Black sea trade route. According to Çavuşoğlu, the UN has already laid out a detailed plan to facilitate the export of grains rotting on the seaports. He had said that the global body wants both the warring sides along with NATO member Turkey to come to common terms.

This comes as Russian Foreign Minister Sergey Lavrov told BBC that his country is not "squeaky clean and not ashamed" of its actions. On the ground, Russian troops have shifted the centre of their offensive to Severodonetsk in the Luhansk People’s Republic (LPR). The Ukrainian Governor of Luhansk, Serhiy Haidai, told The Associated Press that heavy fighting in Severodonetsk continues today as well. Separatists-held Luhansk and Donetsk regions constitute the Donbas region.

READ | Lavrov admits 'Russia not squeaky clean'; says 'we are not ashamed' amid war in Ukraine