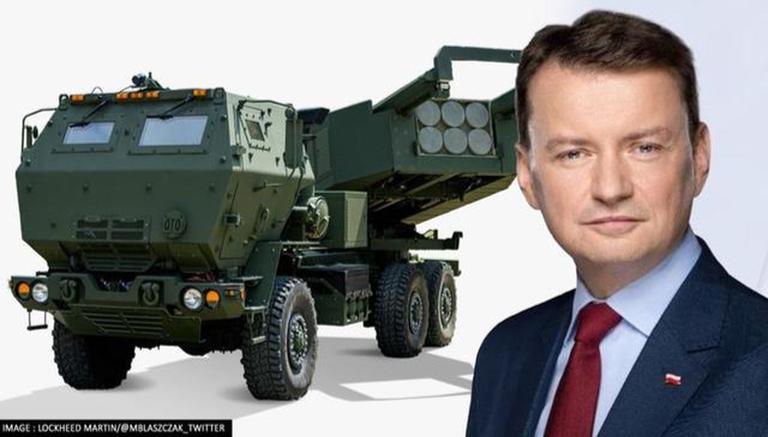 
As the Russian offensive continues in Poland's neighbouring country, the Polish Defence Minister said Warsaw is planning to add more advanced lethal weapons to its military. Through a social media post, Minister Mariusz Błaszczak informed that he has signed the Letter of Recommendation (LOR) inquiry regarding the acquisition of about 500 M142 HIMARS launchers.

"We plan a high level of Polonization of the equipment and its integration with the Polish combat management system," he said while speaking to Polskatimes. The first squadron of HIMARS missiles will be used by the Polish Army next year. He added the government will add more such weapons in the near future.

What is the HIMARS missile system?

According to Lockheed Martin Corporation, an American organisation that manufactures advanced weapons for the US army, HIMARS--High Mobility Artillery Rocket System-- is a full-spectrum, all-weather, 24/7, lethal and responsive, wheeled precision strike weapons system. It is designed to destroy enemy targets as far away as 300 kilometres. It employs a shoot-and-scoot capability which enhances crew and platform survivability in high threat environments.

HIMARS carries a single six-pack of GMLRS rockets or one TACMS missile on the Army's Family of Medium Tactical Vehicles (FMTV) 5-ton truck and can launch the entire MLRS family of munitions. The company claims that with a recognised and proven range of 300 km, HIMARS delivers affordable, quick, long-range precision strikes.

Is Poland helping Ukraine at the expense of the Polish army?

Meanwhile, while answering whether Poland is helping Ukraine at the expense of the Polish army, Błaszczak said Poland has been supporting Ukraine since the initial days of the "special military operation". He noted that "free Ukraine" means "free Poland". Further, he maintained Poland is already equipped with modern equipment and is capable to deter any aggression. "The fact that Polish military equipment goes to Ukraine is in the interest of our country. We fill the gaps that arise by increasing our defence spending. Of course, we are talking to our allies who support us in filling the gaps with a greater or lesser commitment," he said.

When asked about his opinion on Ukraine winning the ongoing war, Błaszczak noted the situation is difficult as Putin's aggression has been witnessed for three months now. Comparing the war with World war II, he termed it "very cruel" and added Russians are committing war crimes to scare Ukrainians. He noted Ukrainian army has been bravely deterring Russian troops from taking further territories.

READ | Poland's Duda says 'only Ukraine has right to decide its future'; asks Russia to withdraw

"Everything indicates that the war will last a long time. Of course, we support Ukraine, because free Ukraine is free Poland. We are doing our best not to border on Russia. We already border Russia - in the north with the Konigsberg Oblas," he said.