Russian President Vladimir Putin told Macron and Scholz that Moscow is ready to continue peace talks with Ukraine, which it believes were halted by Kyiv. 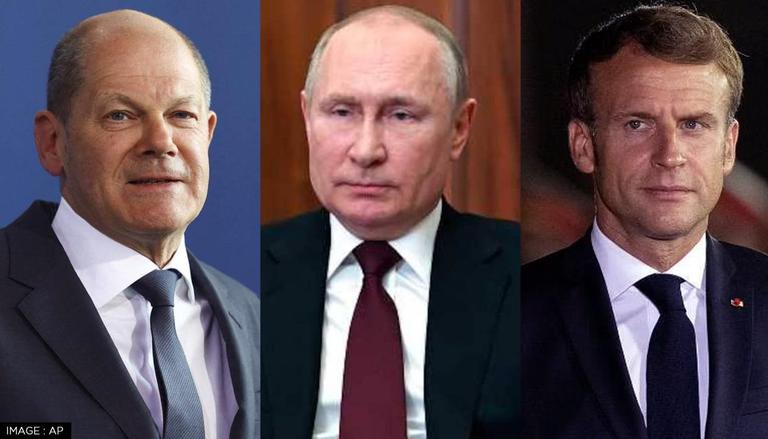 
On Saturday, Russian President Vladimir Putin had a conversation with French President Emmanuel Macron and German Chancellor Olaf Scholz where he confirmed that Moscow is ready to continue peace talks with Kyiv, which Kremlin says were halted by the Ukrainian side. Putin stated that the status of negotiations with Ukraine has been halted by Kyiv and that Russia is open to resuming talks. This comes as Macron and Scholz requested Putin to hold "direct serious negotiations" with his Ukrainian counterpart Volodymyr Zelenskyy.

Since the Russian military offensive started in Ukraine in late February, talks between Russian and Ukrainian delegates have taken place in person and over video links, before it came to a halt. Russia has indicated in the last few weeks that it is ready for negotiation talks with Ukraine. However, Ukraine's President, Volodymyr Zelenskyy stated on Friday that while he does not want to talk to Russian President Vladimir Putin, he recognizes that the talks would be required to end the conflict.

Putin warns about dangers of flooding Ukraine with Western armaments

Macron and Scholz also pushed Putin to release 2,500 Ukrainian fighters who were locked up within the Azovstal steel complex in Mariupol and ultimately surrendered to the Russian army. In the meanwhile, Putin warned Macron and Scholz over the phone about the dangers of flooding Ukraine with Western armaments, warning of the risks of further instability and aggravation of the humanitarian catastrophe, according to Kremlin.

Russia is ready to assist in identifying alternatives for grain exports

On food shortages, the Russian President stated the food crisis has been caused as a result of anti-Russian sanctions. He also stated that Russia is ready to assist in identifying alternatives for grain exports, including exports of Ukrainian grain from Black Sea ports, which were blocked by Russia when the war started.

The global food crisis began long before the start of the military action in Ukraine, Russian Foreign Minister Sergey Lavrov previously stated, due to causes such as the pandemic and Western countries' miscalculations. At the same time, Lavrov stated that the current scenario has aggravated the problem and that Western sanctions have become one of the primary causes of food supply disruptions, which has exacerbated the crisis.

READ | Putin's forces killed 242 and injured at least 440 children in Ukraine since onset of war
READ | Putin warns 'destabilisation' of region over arms supply to Ukraine; 'It's dangerous'