US President Biden and Australian PM Albanese praised the swift progress the US and Australia are making together with the UK, under the AUKUS partnership. 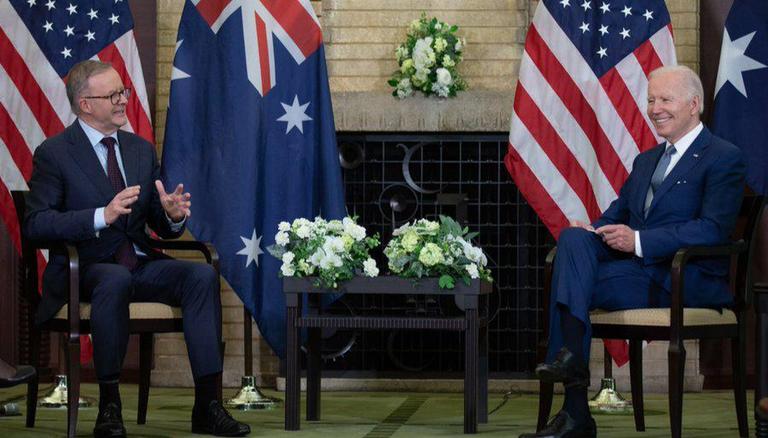 
US President Joe Biden met Australian Prime Minister Anthony Albanese on the sidelines of the QUAD summit in Tokyo where both leaders affirmed to continue their support for Ukraine as it battles unprecedented destruction caused by the Russia-imposed war.

According to the statement released by the White House, President Biden reaffirmed his steadfast support for the US-Australia alliance and commitment to strengthening it further. He commended Australia’s strong support for Ukraine since Russia launched a military invasion on February 24. The leaders praised the swift progress the United States and Australia are making together with the UK, under the AUKUS partnership. They agreed to work closely together to implement the Indo-Pacific Economic Framework and to collaborate in addressing the existential threat posed by climate change.

Great to meet @POTUS today to reaffirm the warm friendship between our two nations based on our shared values. We discussed AUKUS, working together with regional partners, and making comprehensive action on climate change a new pillar of our Alliance. pic.twitter.com/vEB9UY0cuo

In his remarks delivered ahead of their closed-door meeting, US President Biden expressed gratitude to the Australian PM for coming to the QUAD Summit just a day after taking office. While appreciating the newly elected PM, Biden lauded the US-Australia relationship and affirmed to boost bilateral ties further during his tenure.  Though Biden, who had reached Tokyo after a tour to South Korea, looked a bit worn, he jokingly told Albanese, "It would be okay if the new prime minister happened to fall asleep during the meeting."

Meanwhile, while sharing a nearly four-decade-old memory, Albanese, recalled how he visited the United States when he was young. Australian leader said he had spent nearly five weeks in the US. Later, speaking about the commitment of his government to the QUAD, he said Canberra has recently changed its Prime Minister but Australia’s commitment to the QUAD will not change.

“We have had a change of government in Australia, but Australia’s commitment to the QUAD has not changed and will not change," Albanese said.

Notably, the leaders of four nations - the US, India, Japan, and Australia - are currently in Japan's national capital, Tokyo to attend the QUAD summit. It is to note that the Quadrilateral Security Dialogue (QUAD) is a partnership of four nations (Australia, India, Japan and the US), each of whom share a commitment to openness, transparency and challenges coming out of the current global order.