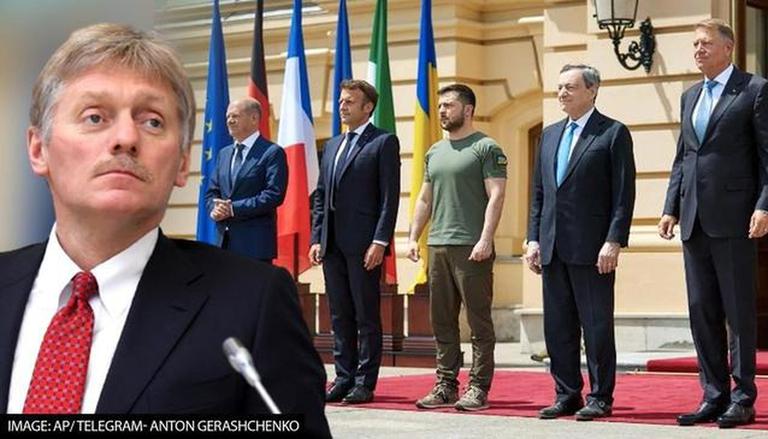 
As the leaders of France, Germany and Italy visited war-ravaged Ukraine in a show of solidarity and support for its citizens amid Russia’s brutal invasion, the Kremlin on Thursday warned the European leaders against “pumping weapons” into Ukraine, which it stressed, could prolong the conflict and exacerbate the suffering of the people.

While the European leaders concluded their meeting, the Russian presidential spokesman Dmitry Peskov told reporters in Moscow that he expects the leaders to have discussed Ukraine’s position on blockaded grain shipments at the ports.

“We know the readiness of our country [Russia], which was announced by President [Putin] to facilitate the passage of the export, as well as to ensure the settlement of this ongoing global food crisis,” said Peskov, adding that Russia is yet to understand Ukraine’s stance.

Peskov acknowledged Ankara’s efforts in establishing a safe corridor for the release of the stranded grain shipments, but added, “We still don’t know for sure whether Ukraine wants this.” Putin’s spokesperson iterated that he hopes this topic “was touched upon” by the European leaders who visited Kyiv earlier today (June 16).

The Kremlin spokesperson registered opposition to the West supplying Ukraine’s military with more weaponry, saying, “I would also like to hope that the leaders of these three states, also the President of Romania will not concentrate only on supporting Ukraine by further pumping weapons into it.”

“This is absolutely useless, it will prolong the suffering of people, it will simply cause further new damage to this country,” he said, insisting that the EU leaders encourage President Zelenskyy to look at the state of affairs.

The three European leaders - Macron, Scholz and Draghi - visited the Kyiv suburb of Irpin, where bodies of nearly 300 people were reportedly discovered after the Russian military left the area at the end of March. In addition, Romanian President Klaus Iohannis vowed to “rebuild everything” after witnessing the destruction in the region.