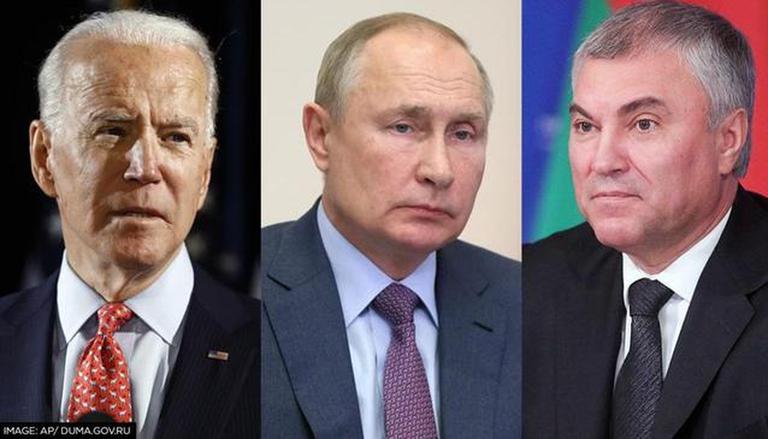 
Chairman of Russia’s State Duma Viacheslav Volodin on Sunday warned US President Joe Biden that the alternative to nearly 1,0128 sanctions imposed against Russia, the largest on any country in the history of the world, will be World War III. In a telegram post on Sunday, Volodin derided the West, stating that the 10,128 sanctions that have been targetted to cripple and "weaken" Russia’s economy, government officials and entities will only make Russia “stronger.”

'Bearer of democratic principles & morality should not act like that': Russian Duma to US

Russian State Duma’s Chairman had also earlier accused Biden of suggesting a regime change and labelling President of the Russian Federation Vladimir Putin a “war criminal.” He had chastised the European nations, and the United States for creating a “hysteria caused by powerlessness” and making remarks that “defy common sense.” The leader of the United States who claims to be the “bearer of democratic principles and morality should not act like that, he said. "No one should say such things about our head of state. Such statements are unacceptable, he insulted Russian citizens who have made their choice and support their President,” Viacheslav Volodin wrote on his Telegram channel.

Volodin further challenged the West, stating that their threats against Russia, including, embargoes, blackmailing, and interference in internal affairs, have drastically failed. The Russian Duma Chairman also accused the United States and NATO’s expansion of its defensive alliance eastwards, stating that it had undermined all the previous agreements. “Washington’s activities have caused such a situation,” he said referring to Russia’s military operation in Ukraine.

“World would have to unavoidably face a big war without solving this issue,” he stressed. He iterated that Washington and Brussels rejected Russia’s proposals on global security issues, and Ukraine had refused to implement the Minsk agreements for eight years. “That is the way that will prevent war in Europe. The only way to stop the bloodbath and humanitarian catastrophe,” Chairman of the State Duma asserted.