Zelenskyy said in a recorded address labelled the Severodonetsk city as the “epicenter” of the battle for the Donbass that would dictate fate of the war. 
Russian forces on June 13 fired Kalibr cruise missiles and destroyed a large arms depot containing US and European weapons, and stormed further into the strategic Ukrainian city of Severodonetsk. Causing the major damages via heavily shelling on the twin city of Lysychansk, Moscow’s soldiers pushed the Ukrainian forces out as battle intensified in Ukraine's contentious eastern Donbass region.

Ukraine’s President Volodymyr Zelenskyy had earlier said in a recorded address labelled the Severodonetsk city as the “epicenter” of the battle for the Donbass that would dictate fate of the war. “This is a very fierce battle, very hard, perhaps one of the most difficult of the entire war,” he had said. 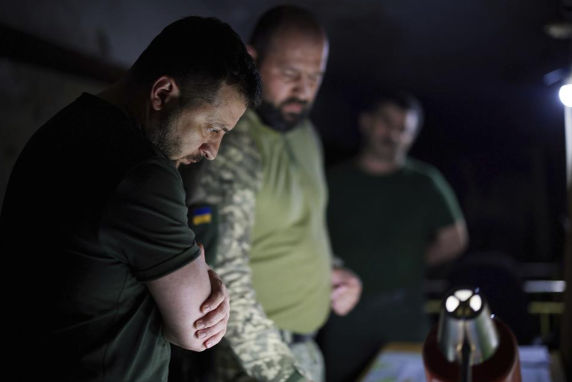 'Epicenter' of confrontation in Donbass

On Monday, as Ukrainian army defended its strategic positions and street fighting ensued. Russian soldiers managed to advance into Popasna, and areas of the Siverskyi Donets river, Serhiy Haidai, the governor of Luhansk region that runs along with the neighbouring Donetsk region said on messaging app Telegram.

"The situation remains difficult. Fighting continues, but unfortunately, most of the city is under Russian control. Some positional battles are taking place in the streets," said Haidai. He accused Russian soldiers of deploying "highly destructive thermobaric rocket artillery” to incur losses on Ukrainian armed forces as latter appealed to the West for more weaponry to counter Russian artillery. 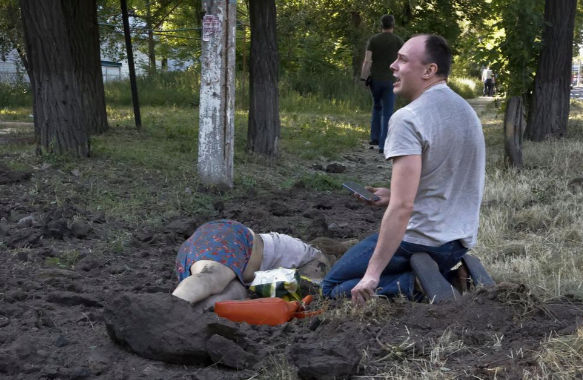 Ukraine man cries over the body of his girlfriend killed by shelling in the Kalininsky district of Donetsk, on the territory which is under the Government of the Donetsk People's Republic control, eastern Ukraine. Credit: Associated Press

"Unfortunately, enemy artillery is simply dismantling floor-to-floor buildings that are used as shelters,” governor of Luhansk region informed. “In this sense,” he stressed, “it is difficult because the enemy will be knocked out of one street, and then they will start dismantling neighbourhoods house by house with tanks, artillery and grads.” Ukrainian forces in Severodonetsk have to concentrate to the new attack positions, the governor informed.

"Severodonetsk remains the epicenter of the confrontation in Donbass," Zelenskyy also agreed in a recorded video. "This is a very fierce battle, very difficult ... Probably one of the most difficult throughout this war,” he said. Russian forces entering Severodonetsk with force is dictating the fate of entire sprawling industrial region in eastern Ukraine, the president of Ukraine stated. The fighting in Donbass has been going on for eight long years since 2014, and the Russian-backed separatists have seized the control of two territories of the self-declared Donetsk People's Republic and Luhansk People's Republic.