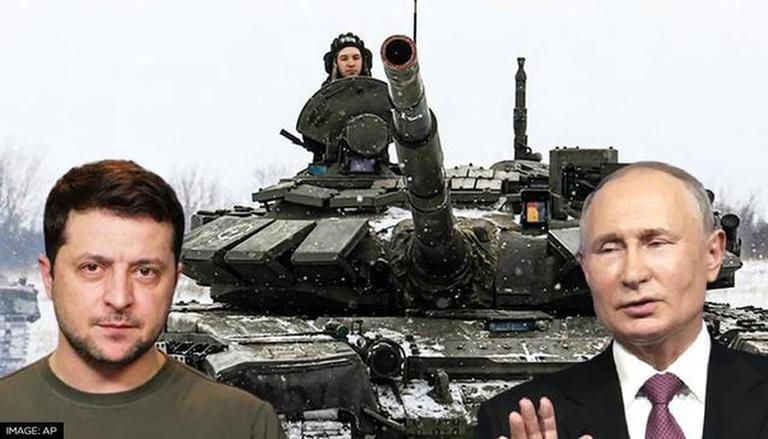 
In a key development amidst the raging war, the Ukrainian army, for the first time, posted video footage of the special forces employing foreign-made 'kamikaze drones' to attack Russian targets. The drone, which was loaded with a heavy explosive, according to the Ukrainian military, caused severe damage to a Russian tank after it flew into it. Taking to Twitter, ‘Ukraine Weapons Tracker’ published the video on Tuesday, identifying the drone in question as a Switchblade 300, which has been supplied by the United States. Furthermore, it claimed that the kamikaze drone or the suicide drone has destroyed the Russian T-72B3 tank with its crew on top.

Moreover, the 44-second-video, which has been recorded from an aerial viewpoint, shows Ukrainian special forces (SSO) utilising the kamikaze drone to target, lock onto and fire at the tank. Following an enormous explosion, a massive column of white smoke can be witnessed in the video.

#Ukraine: Ukrainian SSO (SOF) published rare footage of a kamikaze drone in action, which we identied as a US-supplied Switchblade 300 - hitting a Russian T-72B3 tank with its crew on top.
The tank is unlikely to receive any serious damage, which cannot be said about the crew. pic.twitter.com/sRm5GQNRyL

The video of the Russian tank being destroyed comes at a time when Russia suffered significant losses in Ukraine. During the three-month invasion, Russian troops are said to have suffered a large number of casualties. On May 24, Ukraine claimed that its Armed Forces have slain over 29,350 Russian servicemen since the onset of the invasion on February 24. The Ukrainian Armed Forces have claimed that the invaders have lost more than 1,302 tanks, 3,194 armoured military vehicles, and 606 artillery systems, according to Kyiv Independent.

READ | Russia to pose threat to Europe even after reaching ceasefire with Kyiv, warns Polish FM

According to Nexta, the Armed Forces of Ukraine claimed that the French Caesar howitzers are already at the frontline. The new self-propelled weapons were swiftly mastered by Ukrainian artillerymen in just 2 to 3 hours, according to Commander-in-Chief Valery Zaluzhny.

🇫🇷#French Caesar howitzers are already at the frontline

Besides Russia, Ukraine has also faced losses since Moscow invaded the war-torn country, and it is continuing to pay a high price. The number of Ukrainian troops killed in the battle is unclear, according to the Associated Press report, because the country does not disclose information. However, Ukrainian President Volodymyr Zelenskyy, on the other hand, has claimed that up to a hundred troops may be killed every day in the country's east.