As Russia's offensive against Ukraine continues unabated for nearly five months in a row, the United States is now mulling sending US-made fighter jets to Kyiv. 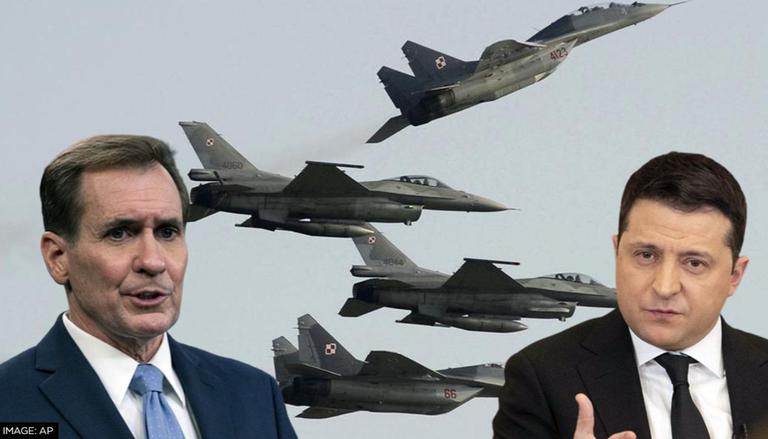 
As Russia's offensive against Ukraine continues unabated for nearly five months in a row, the United States is now mulling sending US-made fighter jets to the war-ravaged nation. While briefing a press conference on Friday, the US National Security Council coordinator for strategic communications, John Kirby, affirmed that the Department of Defence is analysing the prospect of shipping fighter jets to Ukraine. However, he clarified that the decision of sending home-grown fighter jets "is not expected to be adopted in the near future". Citing the reason behind the delay, he said that the integration of aircraft equipped with modern systems is a complex task and takes time. Besides, Kirby said pilots and personnel also need to be trained to operate the American-made fighter jets.

"The Department of Defense will continue to study this issue, but we will also continue to send weapons and equipment to Ukraine within security assistance packages," Ukrinform quoted Kirby as saying. Earlier last week, the Spokesperson for the Air Force Command of the Armed Forces of Ukraine, Yuriy Ihnat, also made a similar statement regarding receiving the US-made aircraft and training Ukrainian pilots. Notably, ever since the onset of the so-called "special military operation", the Biden regime has been providing military aid to the Ukrainian army. As of now, the Biden administration has already sanctioned $55 billion to the war-ravaged nation.

US announces additional $270 million in security assistance to Ukraine

Besides, on Friday, the White House announced an additional $270 million in security assistance to Ukraine, a package that will include additional medium-range rocket systems and tactical drones. In the newly sanctioned military aid, Kirby said the Biden administration will send High Mobility Artillery Rocket Systems, or HIMARS and will also allow Kyiv to acquire up to 580 Phoenix Ghost drones. Also, it includes some 36,000 rounds of artillery ammunition and additional ammunition for the HIMARS. "The president has been clear that we’re going to continue to support the government of Ukraine and its people for as long as it takes," Kirby said. However, he clarified that the administration will not send long-range weapons which have the potential to enter Russian territory-- thus rejecting the desperate demand of the Ukrainian army. He said that the sanctioning of long-range weapons means instigating a broader war with Moscow.