'Clear breach of its commitment': US, EU, UN Condemn Russia’s Attack On Odesa Port In Ukraine After Signing Grain Deal

Hours after the Russian missile hit the Ukrainian port of Odesa, the US, the European Union, the United Nations and others denounced Moscow's "unlawful action". 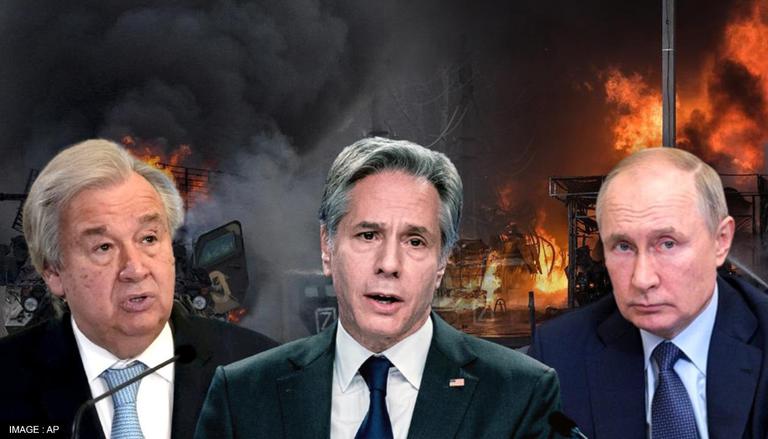 
Hours after the Russian missile hit the Ukrainian port of Odesa, the United States, the European Union, the United Nations and others denounced Moscow's "unlawful action" and termed the attack a clear "breach of its commitment". The US underscored that the attack, which came nearly 24 hours after the finalisation of the UN-brokered deal, violated the agreement and raised serious doubt about the credibility of the Kremlin's commitment to allow free movement of grains for the whole world. "Just 24 hours after finalising a deal to allow the resumption of Ukrainian agricultural exports through the Black Sea, Russia breached its commitments by attacking the historic port from which grain and agricultural exports would again be transported under this arrangement," US Secretary of State, Antony Blinken said in a statement released on Saturday.

The United States strongly condemns Russia’s attack on the port of Odesa today. It undermines the effort to bring food to the hungry and the credibility of Russia’s commitments to the deal finalized yesterday to allow Ukrainian exports.

He noted that the Kremlin continues to disregard the safety and security of millions of civilians as it perpetuates its assault on Ukraine. Further, Blinken underscored that the recent action by Moscow would starve the already war-ravaged nation of its economic vitality and the world of its food supply through the effective blockade of the Black Sea. He said that the Kremlin leaders must bear responsibility for deepening the global food crisis and added it must stop its aggression and fully implement the deal to which it has agreed.

Meanwhile, the UN Secretary-General, Antonio Guterres, also 'unequivocally' condemned the reported strikes in the port of Odesa. He noted that the products which are transported to other parts of the world are desperately needed to address the global food crisis and ease the suffering of millions of people in need around the globe. "Yesterday, all parties made clear commitments on the global stage to ensure the safe movement of Ukrainian grain and related products to global markets. These products are desperately needed to address the global food crisis. Full implementation by the Russian Federation, Ukraine and Turkey is imperative", Guterres said in a statement published by his spokesperson.

EU calls the attack a total disregard for international law

The European Union's foreign policy chief Josep Borrell slams what he called Russia's "reprehensible" missile attack. In a tweet, he said that striking a target crucial for grain export a day after the signature of the Istanbul agreements "is particularly reprehensible and again demonstrates Russia's total disregard for international law and commitments". Notably, major seaports had been blocked in Ukraine since the initial days of the war. However, after months of discussion, Russian and Ukrainian Ministers signed a deal in Istanbul on Friday and dubbed it "the Black Sea Grain Initiative". The main aim of the agreement was to resume Ukrainian grain exports via the Black Sea amid the ongoing war.

Though Ukraine also accused Russia of the major attack on the Odesa port, Moscow denied any role in the raids on the Ukrainian port after the grain deal. Russian officials told Ankara that the Kremlin had "nothing to do" with the recent episodes on Ukraine's key Black Sea port of Odesa, said Turkish Defense Minister Hulusi Akar. "In our contact with Russia, the Russians told us that they had absolutely nothing to do with these attacks and that they were examining the issue very closely and in detail," Akar told Turkey's state-run Anadolu Agency.