'If everyone was like Britain...' | Volodymyr Zelenskyy Lauds UK For Helping Ukraine Amid War, Seeks Boycott Of Russian Fuel

Ukrainian President Volodymyr Zelenskyy, on Friday, lauded Britain for their support of his country amidst the ongoing war in East Europe. 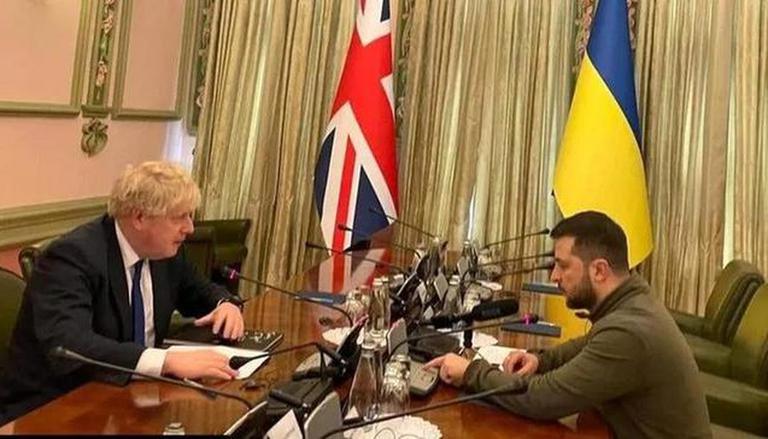 
Ukrainian President Volodymyr Zelenskyy, on Friday, lauded Britain for the support it showed amidst the ongoing war. Late on Friday, Zelenskyy virtually addressed Chatham House, an international think tank and stated that if everyone were as brave as the UK and Ukraine, then Russia’s war would have already been over. Calling on Putin’s forces to retreat, he also asserted that he was appointed as the President of “Ukraine” and not “mini Ukraine.”

He said, “If everyone in the world... were steadfast and courageous leaders like Ukraine, like Britain, I am sure we would have already ended this war and restored peace throughout our liberated territory, for all our people.”

Since Moscow began its invasion on February 24, UK Prime Minister Boris Johnson has made two visits to Ukraine where he met Zelenskyy and also surveyed the damage caused by Russian artillery. Moreover, Downing Street has been pulling all stops to support Kyiv in its resistance to the Russian invasion which entered Day 73 on Saturday. Ever since the onset of the war, it has been supplying weapons to Ukrainian troops. In a more recent development, the UK has laid out various schemes to assist Ukrainian refugees.

During his late-night address, the embattled leader also noted that he was elected as President of Ukraine and not mini Ukraine. Addressing his followers at Chatham, Zelenskyy stated that if peace negotiations between Kyiv and Kremlin were to succeed, then it was necessary for Putin's troops to retreat to the territories that they owned before February 24. He also accused Russia of “outright nuclear blackmail,” saying “Russia is blackmailing Europe through threats.”

“I was elected by the people of Ukraine to be President of Ukraine. Not to be the president of a rump or reduced Ukraine. The minimum is to reclaim all our territories as of the 23rd February. Russia must withdraw.”

The embattled Ukrainian leader also claimed that the Putin administration earned as much as US$1 billion every day through the export of hydrocarbons. The 44-year-old noted that if it wasn't halted, then "next missiles could hit your countries."  “You cannot place sanctions on Russia with one hand, and sign Russian contracts with the other. This is hypocrisy. Russia makes $1bn a day from energy. If this doesn't stop, the next missiles will hit your countries," Volodymyr Zelsnkyy warned while addressing the international think tank Chatham House.

READ | 'Russia will stay in Ukraine forever, there'll be no return to the past': Kremlin official

“I am a living witness to how the nation of Ukraine has responded to Russia's aggression. In the face of war crimes we are all the collective witnesses to war cimes. We want justice, starting with MH17.”

WE RECOMMEND
Zelenskyy appoints new ambassadors to Slovenia, Romania, Montenegro and Northern Macedonia
Medvedev says Zelenskyy does not require peace treaty as he wants to beg money from West
Zelenskyy appeals to EU nations, Russia to 'restore Ukraine' once hostilities cease
Zelenskyy does not see 'readiness' from Russia to end war with Ukraine
George Bush hails Zelenskyy's 'commitment to liberty', calls him 'Churchill of our time'