Zelenskyy Hosts US Senate Delegation Amid Conflict; Asks For More Sanctions Against Russia 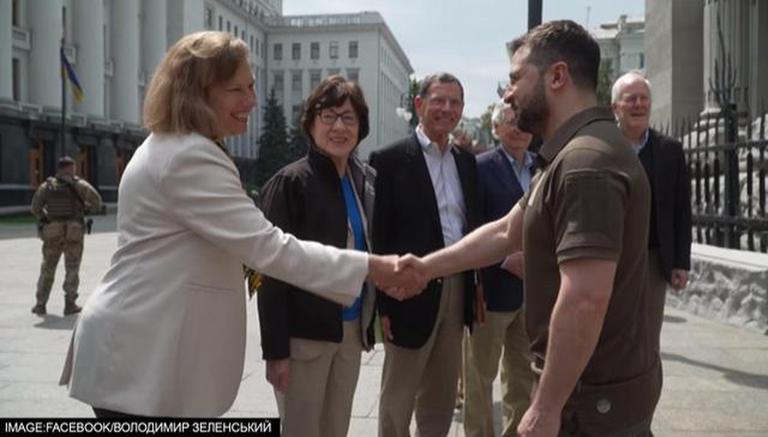 
On May 14, a delegation from the United States Congress' upper chamber visited Ukraine to meet Ukraine's President Volodymyr Zelenskyy. The delegations were led by Minority Leader Mitchell McConnell. President Zelenskyy received the delegation and stated that the US Congress and the American people have shown strong bipartisan support for Ukraine. Zelenskyy also stated that Ukraine is currently fighting the Russian invader, protecting not only its state but also democratic principles and freedoms, as well as the right of people to freely select their own future. He also asked for more sanctions against the Russian Federation stating that it is important to put pressure on the aggressor.

Zelenskyy further said, "The visit of the U.S. Senate delegation led by Republican minority leader to the Upper House of Congress, Mitchell McConnell, is a powerful signal of bipartisan support for Ukraine from the United States Congress and the American people. Thank you for your leadership in helping us fight not only for our country but for democratic values and freedoms. We do appreciate it very much."

Russia is perpetrating genocide on the people of Ukraine: Zelenskyy

The Ukraine President went on to say that Russia is perpetrating genocide on the people of Ukraine and that they have committed crimes like torture, mass killings, and rape amongst other atrocities that alarm the entire globe. He further claimed that such crimes have not been seen in Europe since World War II. Zelenskyy also emphasised the United States' unique role in strengthening sanctions pressure on Russia. In particular, he stressed the adoption by the United States Congress of laws banning the import of Russian oil and the suspension of trade relations with Russia and Belarus. He believes that increasing sanctions pressure on the aggressor country is important, according to the official website of the President of Ukraine.

Volodymyr Zelenskyy further stated that they feel that Russia should be designated as a state supporter of terrorism. The President expressed gratitude to the US for its leadership in assisting Ukraine. He also expressed hope that the US Senate would quickly adopt a package of additional funding for the Ukrainian people, which had already been examined in the House of Representatives and had been expanded from $ 33 billion to $ 39.6 billion.