"Bakhmut, Soledar, Maryinka, Kreminna, there is no living place left on land of these areas that have not been damaged by shells and fire," said Zelenskyy. 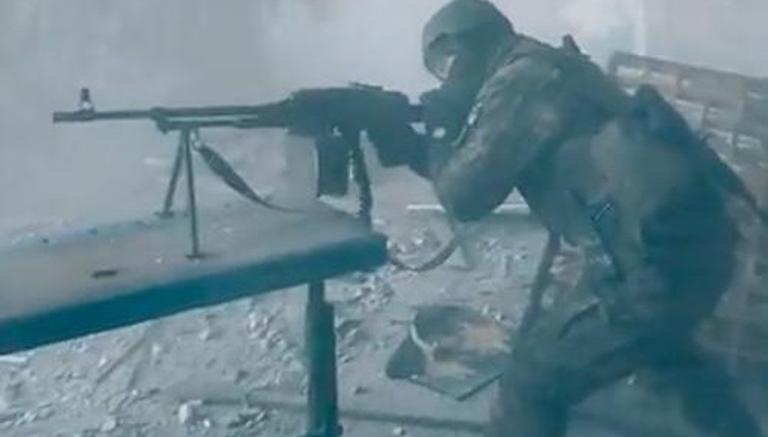 
Ukraine's President Volodymyr Zelesnkyy on Tuesday derided intense wave of the Russian shelling and artillery strikes in the eastern Ukrainian city of Bakhmut and accused the Russian forces of destroying the entire city, and reducing it into “burnt ruins." Russian soldiers, and PMC Wagner mercenaries plummetted Bakhmut with barrage of missile, rocket and drone attacks, killing civilians and destroying the critical infrastructure in one of the fiercest battle witnessed in course of the 10-month war.

Combat in Bakhmut doesn't stop even at night.

Glory to Defenders of Bakhmut! pic.twitter.com/E4bve7RIyN

The city has turned into most violent front line in the war, as nearly every single residential building is reduced to debris, rooftops damaged with bullet holes, and windows shattered from relentless shelling and street to street fighting between the warring troops. Ukrainian armed forces counter attacked to stifle Russia's northern, eastern, and southern approaches from the direction of Bakhmutovka River. Russian soldiers have also made incremental territorial gains as Ukrainian forces pulled out from some of the defensive positions due to heavy fighting and mounting casualties.

Chechen volunteers near Bakhmut. The guys fighting there are absolute heroes. pic.twitter.com/4yRM3qxqJN

Russian military, fatigued and frustrated with territorial losses has been desperate to capture Bakhmut as it is located in the annexed Ukrainian region of Donestsk. In September Russia's President Vladimir Putin formally incorporated four provinces— Luhansk, Zaporizhzhia, Kherson and Donetsk—into Russian Federation. As Russians launched an all out frontal assault on the city instead of militarily encircling it, nearly 90% of the city's prewar population an estimated 70,000 have fled, and the entire city, now resonating with fierce Russian bombing, has no power, gas, running water, heat or even mobile network.

READ | 'Russia has not given up its terror tactics': Zelenskyy warns Kyiv against future strikes

A childhood crippled by the war.
Kalinouski's soldiers were driving through Bakhmut, and saw a boy. Stopped, talked, bought sweets, which he took for himself and gave to the local children. No child should go through the horrors of war. We just have to help stop war in Ukraine! pic.twitter.com/lv5Le7eZXc

Russian forces have "destroyed" the eastern Ukrainian city of Bakhmut, he stressed.

In his nightly address, as Ukraine's armed forces struggled to maintain their line of defense in face of full frontal Russian bombardments, and firing, Zelenskyy said: "Bakhmut, Soledar, Maryinka, Kreminna. For a long time, there is no living place left on the land of these areas that have not been damaged by shells and fire." Furthermore, the angry Ukrainian President noted  that Russian occupiers have completely destroyed Bakhmut.

Ukrainian military General Staff said in an update that Russians conducted 20 airstrikes and more than 60 rocket attacks across Ukraine in just 2 days this week but the most grinding battle waa taking place in Bakhmut, that some have on Twitter have described resembled scenes from WWI's western Front.

Evacuation from Bakhmut. Listen to all the sounds of shelling in the background.

Glory to all the volunteers who risk their lives to rescue people.

Ukrainian forces struggled to repel the Russian attacks in Donetsk and neighboring Luhansk. In the footges circulating online, Ukrainian snipers were seen hidden in the civilian buildings trying to thrawt Russian fire. Invading Russian troops have accumulated most of their manpower, troops, weapons encircling the city.

Capturing Bakhmut would cut off Ukraine's military supply lines due to blockade of the crucial highway and will open a route for Russian forces to press toward Kramatorsk and Sloviansk regions, the key strongholds in Donetsk. Russian troops also pressed their Donbass offensive in the direction of the Donetsk city of Lyman, located approximately 65 kilometers (40 miles) north of Bakhmut. They "managed to take more advantageous positions for further advancement," Russian MoD said.

"The costs associated with six months of brutal, grinding, and attrition-based combat around Bakhmut far outweigh any operational advantage that the Russians can obtain from taking Bakhmut,"  Institute for the Study of War, a think tank in Washington said in its analysis on Twitter.