Cuba President said that reforms in the currency system will begin in 2021, adding that there will be a single exchange rate of 24 Cuban pesos for one dollar.

Cuba on December 12 announced that it will unify the Cuban peso and the Cuban convertible peso as one currency, and put an end to the decades-old dual currency system effective January 1, 2021. President Miguel Diaz-Canel said in a statement that the country will begin the reforms in its currency system beginning 2021, adding, that he will introduce a single exchange rate of 24 Cuban pesos for one dollar. In a state television address, the Cuban president, alongside Raul Castro, the country's former president, and Communist Party leader told citizens that he was going to eliminate the convertible peso, or CUC, created in 1994, and will adopt the Cuban peso, or CUP as the official currency.

#Cuba will end its dual currency system on January 1. For nearly 30 years, it has had two pesos, the normal one and another pegged to the US dollar. The reform will threaten unprofitable companies and the value of savings. https://t.co/DQdP1Oj0EV https://t.co/xMdDf5mRSM

In a live-streamed address, the Cuban leader emphasized that the country needed to upgrade the economic and social framework with new reforms, and unifying the currency into one will ease the trade and commerce. Mainly, because the country was reeling under the economic impact of the global coronavirus pandemic that has lately slumped tourism and rendered the businesses in the loss. Amid the “bleakest moments” of the country, the president reportedly said that these reforms will stabilize the fluctuating exchange rate. However, it might create hurdles for the employees that received their salaries in convertible pesos, the Cuban President warned, adding, that those that used convertible pesos, their purchasing power eroded in midst of health crisis and lockdown. 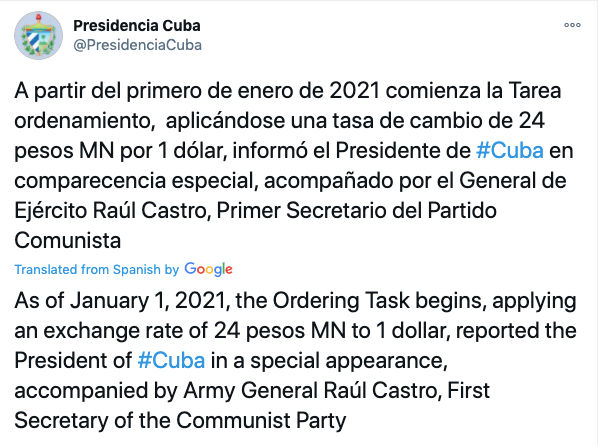 According to several media reports, the experts have hailed the move as beneficial for the consumers as for over several years, the government reportedly set low prices for goods and services for basic rights, and high prices for luxury brands. This created a rift in consumer purchasing power and hampered the economic growth in the country. Meanwhile, the Cuban economy dramatically suffered under the sanctions imposed by US President Donald Trump who stricter imports of Cuban goods and banned the Americans from staying at properties owned by the Cuban government. The monetary change, according to economists, will reposition the country for the better.

Read: Eta Zeroes In On Cuba, As Guatemala Searches For Victims