On Saturday, demonstrators protesting against Peru's President Pedro Castillo got into an altercation with the police in the nation’s capital Lima 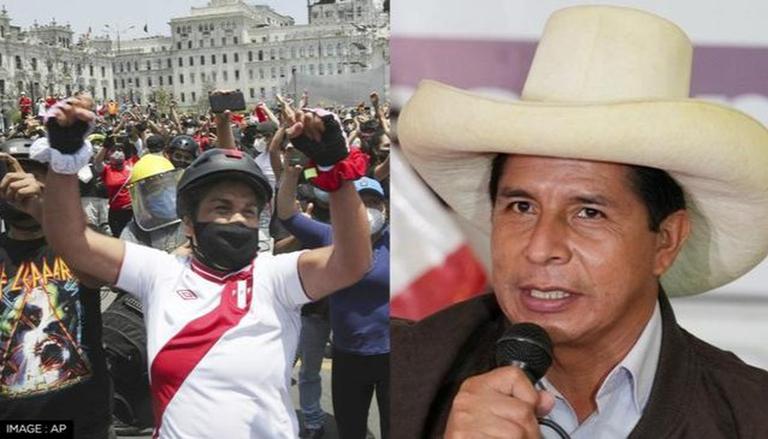 
On Saturday, demonstrators protesting against Peru's President Pedro Castillo got into an altercation with the police in the nation’s capital Lima. According to the BBC report, thousands of people participated in anti-government marches around the nation, while riot police deployed tear gas to disperse demonstrators in Lima. During the demonstrations, police on horses tried to stop the procession from approaching the government palace.

According to media reports, police used tear gas to disperse the aggressive protestors after they violently reacted to them. Further, citing local media, DW reported demonstrators assaulted a police officer on a horse, forcing the horse to fall.

In addition to this, the protestors marched towards the Congress in the country's capital Lima while carrying national flags and yelling anti-government slogans, DW reported. The protesters were met by police officers who were having riot gear and were equipped with plastic shields. In an effort to scatter the protesters, police fired six tear gas canisters into the gathering. It is pertinent to mention that no immediate reports of injuries were made.

READ | Demonstrators in support of new probe against Peru president

Protesters have been demanding on embattled President Pedro Castillo to step down due to corruption charges.

The leader of the left-wing, who unpredictably took office last year, is the center of six criminal investigations, although he denies his wrongdoings. The South American country, Peru currently faces numerous economic problems, including rising living expenses. Castillo became the President after promising to narrow the wealth gap, but his proposals have been mostly thwarted by an opposition-controlled Congress.

According to the World Bank, the nation was particularly hard-struck by COVID-19, and poverty levels are expected to stay above pre-pandemic levels for the next two years.

Besides this, in a speech earlier Saturday morning, President Castillo said that he had been the target of "false accusations and unimaginable calumnies."

Meanwhile, in October, hundreds of protesters marched to urge Congress to remove President Pedro Castillo. According to the Associated Press report, up until they approached the Government Palace grounds, which had a police barricade, the demonstrators calmly marched beside a police line. In an attempt to get to Castillo's palace, several clashed with the police.

On August 13, protesters came to the streets of Lima to voice their opposition to President Pedro Castillo's government as he is the target of many corruption investigations. Numerous people marched to the General Attorney's office to demand Castillo's resignation.