Boat Gets Stuck On Top Of Rock In English Channel; Crew Members Have Miraculous Escape

The motor cruiser collided with the rocks underwater in the English Channel, and then the tide went out, leaving it 10ft in the air, according to Metro News. 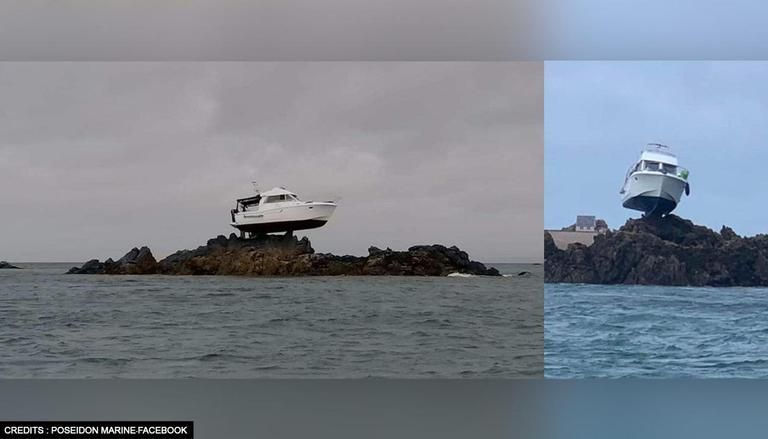 
In a bizarre incident, a boat managed to stuck in the air impaled on a rock in the English Channel Island after it ran aground on September 10, Friday, late at night. According to Metro News, the motor cruiser collided with the rocks underwater, and then the tide went out, leaving it 10ft in the air. The report said that the boat crew members had a miraculous escape as they also hovered around 12 hours in the ship. Later the crew members were rescued by the Royal National Lifeboat Institution, the largest charity that saves lives at sea around the coasts of the United Kingdom, and coastguards at the Ecrehous mini islands, off the coast of Jersey. Luckily, the crew members were rescued with minor injuries.

While speaking to the United Kingdom-based newspaper, a spokesperson of RNLI Jersey said that the incident was reported from Ecrehous, where some crew members requested help from Lifeboat stations. Responding to the request, the spokesperson said that the station deployed its St Catherine’s inshore lifeboat at around 11 in the morning. He maintained that the helpline staff were stunned to know that a boat was grounded at the Ecrehous reef. "Whilst the ship was in a dangerous position, it was not in immediate risk as it was clear of the water on a falling spring stream. The mishap boat’s seafarers had already been shifted to the main island by Seafaris who were on scene as a member of a programmed trip of the reef," quoted Metro spokesperson as saying. Further, the spokesperson maintained that the rescuers were able to shift the ship to a safer place after struggling more than 12 hours and added the crew members were also rescued safely, with some reporting minor leg injuries."Many thanks to Jersey Coastguard for coordinating the rescue and Jersey Seafaris for their assistance on the day," told the spokesperson to Metro.

Have a look at some of the bizarre water accidents

On 23 March, Ever Given was stranded sideways blocking Egypt’s key maritime route Suez Canal and halting the world’s supply of goods, cargoes, and oil tankers. Although the incident had sparked a hilarious series of memes, the Suez canal crisis had caused the world a trade loss worth billions of dollars. The Suez Canal Authority had slapped a $916.5 million claim against Japanese vessel owner Shoei Kisen placing the accountability of the crisis on him. The 1,300-foot container ship MV Ever Given was then seized by the Egyptian authorities and was not allowed to leave the anchorage of Great Bitter Lake until compensation for the Suez canal blockage was paid.