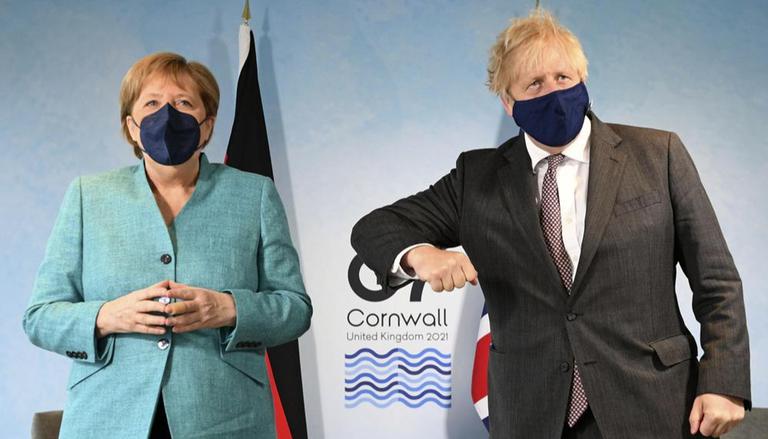 
As the Group of Seven (G7) leaders summit marked the first major meet of the world’s major democracies and all eyes were on Cornwall, there was a lot riding on the event such as division in Europe. It was also the first G7 summit held in two years and that too after the COVID-19 pandemic. In the photographs that emerged following the event, the leaders of the UK, Canada, France, Germany, Italy, Japan and the United States were seen elbow-bumping each other.

However, the host, UK Prime Minister Boris Johnson received no response from German Chancellor Angela Merkel when he elbow-bumped her while adhering to rules of social distancing. The G7 leader’s summit from June 11-13 is also the final one for the German Chancellor who has served as a bulwark for Europe for 16 years. Apart from Johnson and Merkel’s awkward photograph, a barbecue dinner was also captured where none of the leaders appeared to practice social distancing.

As per Bloomberg report, these pictures from the G7 leaders' summit hinted at the ‘tensions and contradictions bubbling under the surface on issues from China to climate change.’ issues like Brexit even caused a heated exchange of words between UK PM and European leaders including French President Emmanuel Macron while Merkel sought to ‘rise above the fray.’

Thank you for being a brilliant host, Cornwall.

The G7 Summit 2021 has officially come to a close, and what a few days it has been. We wish everyone a safe journey home.

Macron And Johnson Sparred At G7 Over Northern Ireland

The European Union (EU) leaders including French President Emmanuel Macron sparred with UK Prime Minister Boris Johnson over the post-Brexit geography of the UK and France with regards to Northern Ireland. The debate regarding the fate of the 14,130 km² area of Northern Ireland which shares a border with the EU member state has been a part of the disagreement between France and the UK ever since Britain voted to leave the 27-nation-bloc in 2016.

While there has been only a little progress over the issue despite discussions, the latest spat between the nations came after Britain’s Telegraph newspaper reported that macron suggested during sideline talks of the G7 summit with UK PM that Northern Ireland was not part of the UK. This was after Johnson queried how he would react if French courts barred the shipment of Toulouse sausages to Paris.

As per the Independent, a British government source is reported to have said the French President replied to Johnson’s question by saying that it was “not a good comparison because Paris and Toulouse are part of the same country.” Macron’s answer sparked a furious reply from Johnson who reportedly said, “Northern Ireland and Britain are part of the same country as well.