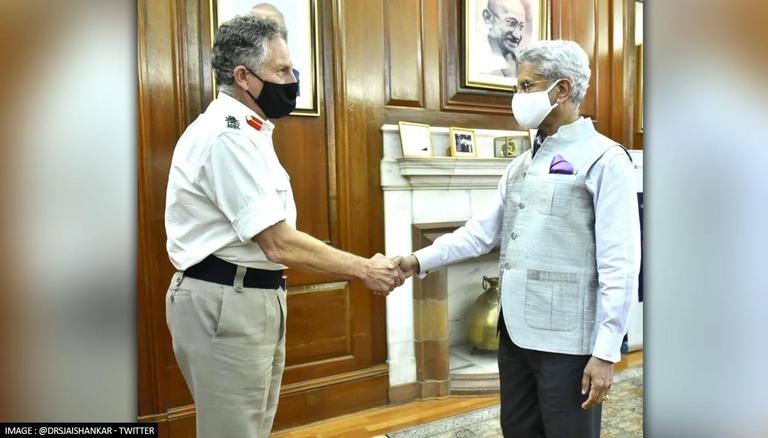 
In a key development, External Affairs Minister S Jaishankar met United Kingdom Chief of Defence Staff General Nicholas Carter in the national capital on Friday. Reports suggest that both delegates deliberated on the ongoing situation in Afghanistan and issues pertaining to Indo-Pacific.

The UK Chief of Defence Staff is on a three-day visit to the country and had laid a wreath at the National War Memorial and received a Guard of Honour at the South Block. This marks his first visit since the Taliban advanced a successful and violent conquest of the war-ravaged state on August 15, 2021. Apparently, China's ascending assertiveness in the Indo-Pacific region.

On October 22, the UK Chief of Defence Staff called on his Indian counterpart General Bipin Rawat to discuss the enhancement of the defence cooperation between the two countries.

The official Twitter handle of the Indian Army had shared, "General Sir Nicholas Carter, the Chief of Defence Staff, UK called on General Bipin Rawat and discussed steps to take forward the defence cooperation between India and UK."

On October 22, the Indian Navy stated that maritime cooperation is a 'distinguishable symbol of the commitment of both nations in ensuring a positive climate at sea for enhancing strategic stability and promoting global economic prosperity," and the 'interoperability achieved over the years, as a result of such exercises, has proved to be operationally beneficial to armed forces of both countries."

Notably, the joint maritime exercise will be carried out on the west coast in two phases. While the sea phase will conclude on October 27, the harbour phase will be conducted in Mumbai, between October 21-23. The English Navy is represented by its Queen Elizabeth aircraft carrier with her F35 fighter jets and helicopters. The Royal Navy's participating fleet will also have Type 45 Daring Class air-defence destroyer HMS Defender, Type 23 frigate HMS Richmond, a Royal Fleet Auxilliary (RFA) Fort Victoria, and a Royal Netherland Navy Frigate HNLMS Evertsen.

Meanwhile, the Indian Air Force will comprise Jaguars, Su-30 Mki, AWACA, AEW&C and sea exercises will feature advanced warfare tactics, anti-submarine warfare exercises, over the horizon targeting drills, air defence exercise, cross deck landings and other mechanisms too, the Indian Navy had stated. Furthermore, the landed phase of the joint exercise is set to be conducted at Chaubatia in Uttarakhand with UK troops and the Indian Army's Gorkha Rifles 1/11.