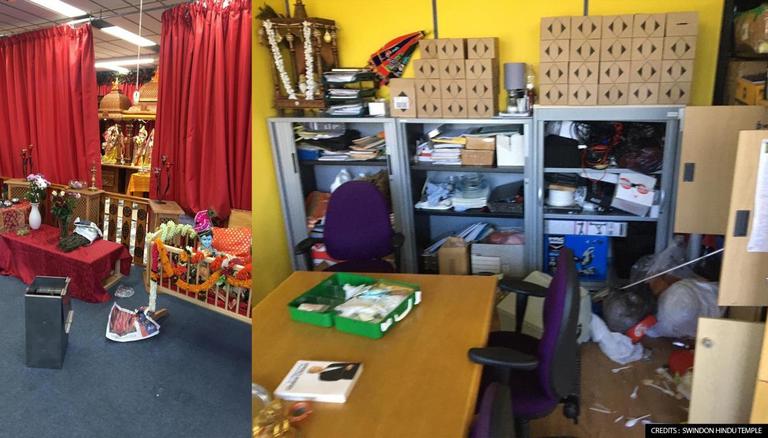 
In yet another incident, the Swindon Hindu Temple in the United Kingdom was vandalised and robbed for the fifth time on Saturday. According to reports, the attack is a part of several other incidents where Hindu temples were vandalised. In the latest attack, the main altar of the temple that seated deities was vandalised while thousands of pounds of cash was also stolen. The statement of the incident was issued by Temple Chairman Pradeep Bharadwaj.

“It is with great regret that I have to inform you about a major incident that happened yesterday at Swindon Hindu Temple, affecting more than 10,000 people in Swindon and thousands more in the region.”

“They have entered the main altar of the temple where the deities are placed, and vandalised that area – this is a highly sanctified and consecrated space where only priests are allowed to enter.” Bhardwaj added

“This is a matter of great concern and of utmost sensitivity for all Hindus," he said

Bhardwaj stated that the Swindon Hindu Temple is the only Hindu temple in the entire area. He further stated that the temple had been closed for the most part of the last 18 months. In view of the upcoming Hindu festivals, the community was very eagerly looking forward to resuming their normal activities, Bhardwaj added.

Following the incident, the Swindon Borough Council was informed and Bhardwaj has pleaded to meet the Police Commissioner and the Chief Constable. Meanwhile, the Wiltshire Police have requested information on the incident from people and its spokesman said that enquiries are going on regarding the incident.

WE RECOMMEND
'No dither, delay': UK PM unveils new tax to fund elderly care, health costs for COVID-19
UK: NHS to get additional £5.4 billion to help deal with COVID-19 backlogs
UK engineers develop robot worms that can 'sense' the world around them, read details
Meteor spotted blazing through UK's Hampshire, lands in sea near South of France
UK: This restaurant has a job that pays Rs 50,000 for tasting potatoes and meat