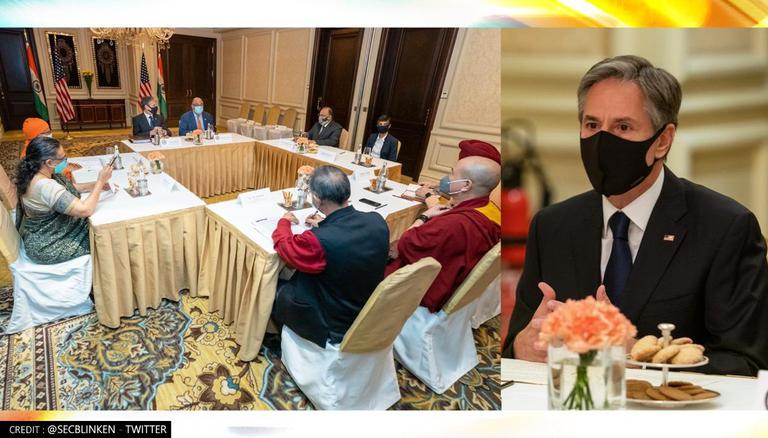 
In a big political message to China on Wednesday, July 28 US top diplomat Antony Blinken, on his two-day visit to India, met Tibetan Buddhist monk Geshe Dorji Damdul, the current director of Tibet House in the national capital. He was even present as a translator when the group of civil society leaders met US Secretary of State, Blinken, earlier in the day.

Setting a tone of his India visit, Antony Blinken met with the representative of Tibet spiritual leader, the Dalai Lama- Tensin Gyatso also known as Tibetan government in exile. Of late, the Tibetan advocacy groups have hailed a boost in international support amid heightened reports on criticism of China's self-imposed hegemony and human rights record. The meeting is said to irk Beijing which claims Tibet as an integral half of China.

Taking to Twitter, Blinken stated, "I was pleased to meet civil society leaders today. The US and India share a commitment to democratic values; this is part of the bedrock of our relationship and reflective of India’s pluralistic society and history of harmony. Civil society helps advance these values."

I was pleased to meet civil society leaders today. The U.S. and India share a commitment to democratic values; this is part of the bedrock of our relationship and reflective of India’s pluralistic society and history of harmony. Civil society helps advance these values. pic.twitter.com/5NL2WiQ13o

Damdul is a director of Tibet House which was established in 1965 by the Dalai Lama to preserve the cultural heritage of Tibet. Chinese troops invaded Tibet in 1950 and later annexed it. Tibetans and Chinese soldiers clashed violently during the 1959 Tibetan uprising and after a failed revolt against Chinese sovereignty, the 14th Dalai Lama escaped to India. Tensin Gyatso is the highest Tibetan Buddhist leader and is called the Dalai Lama who fled China and set up the government-in-exile in India. The oppression continued for over eight years until the Tibetans, aiming to overthrow the Chinese, initiated a full-swing civil uprising. The results were, however, nowhere close to the expectations and, in fact, led to a complete downfall of the Tibetan Government and the self-imposed exile of Dalai Lama along with 100,000 Tibetans, established the Tibetan Government-in-exile, headquartered in Dharmshala, Himachal Pradesh. Nearly 64,000 Tibetans living in exile in India, Nepal, North America, Europe, Australia and elsewhere voted.

US' & India's support to Tibet

Since Xi Jinping came to power in 2013, he laid down a stringent policy of boosting security in Tibet. Beijing has reportedly been a crackdown on Buddhist monks and Dalai Lama while the US and India raised Tibet's issue of human rights violations on various platforms.

In the first such visit in over six decades, in November 2020 the former head of the Tibetan government, Sangay had visited the White House following which the US Congress even passed Tibet policy wherein they called for rights of Tibetans to elect the successor to Dalai Lama and establishment of the US consulate in Tibet. However, China's foreign ministry did not respond to the request considering Beijing claims that Tibet is a part of its Communist regime and labelled Dalai Lama a dangerous separatist.

While speaking to Republic, the President-elect of the Tibetan government in exile Tsering had said, "The Chinese community is completely overwhelming our minority community and destroying its identity, amounting to a certain level of cultural genocide. Tibetan Buddhists' freedom of religion is being violated., he added, referring to the placement of surveillance cameras in Tibetan Buddhist monasteries."

Exiled Tibetans chose Penpa Tsering in elections held in January and April. It was the third direct election of the Tibetan exile leadership since the Dalai Lama withdrew from any political role in the running of the government in exile in 2011.