What may not have been a DC universe superhero film, in an act of kindness 'Batman' has come to the rescue of a girl who was being bullied at a daycare.

What may not have been a DC universe superhero film, in an act of kindness 'Batman' has come to the rescue of a girl who was being bullied and harassed at her daycare center. The three-year-old Lydia wanted help so the caped hero tagged along to the daycare and reportedly worked marvels. The pictures of Batman walking with the little girl has since been widely circulated. The netizens are in awe of the gesture while some outrage as to how a girl so young be bullied.

READ: Mumbai Rains Didn't Cause This Viral 'waterfall', Here's What Did

According to local news reports, Lydia's mom said that her daughter had bruises when she came home quite frequently. When the daughter came with bruises that is when she thought that she should inform the staff. Calculli said that despite this little action was taken and after that, she decided to share the story on Facebook. Lydia's mom further said that she took pictures and her daughter revealed that a couple of girls and a boy hit her with a girl throwing a shoe at her. At that time, the 'Batman' stepped in and tagged along with her at the daycare center to tell the bullies that she had a best friend and that he will come again to check back.

The Batman Of Spring Hill

A man by the name of Jack Asbury, who works as an Emergency Medical Technician in Citrus County in Florida, thinks that an ordinary man without any superpowers can become a superhero. Reportedly Jack said that he knelt down next to her and told her that she is going to have a great day and she will be fine. Jack and Lydia's mother have been friends for some time and he saw her Facebook post about how Lydia was enduring a hard time. Jack knew that Lydia liked superheroes and asked if he could walk her to school as Batman. Jack narrated the series of events that day and said that the little girl was nervous and wary but on being told about a gift she got comfortable. The local superhero also bought her own supergirl dress and told her that she was brave as a hero. Lydia's mom later thanked Jack for helping her daughter in a message on Facebook.

The pictures have over two thousand different reactions with hundreds of comments and over 500 shares. "What a wonderful friend to have," said a user. "So sweet, great act of special kindness for this little cutie," said another user.  Some even wondered how can a girl so young be bullied with a user commenting "How can anyone pick on this sweet little child come on parents !!! Talk to your kids about Bullying and how it would make them FEEL!!!!!!!!. 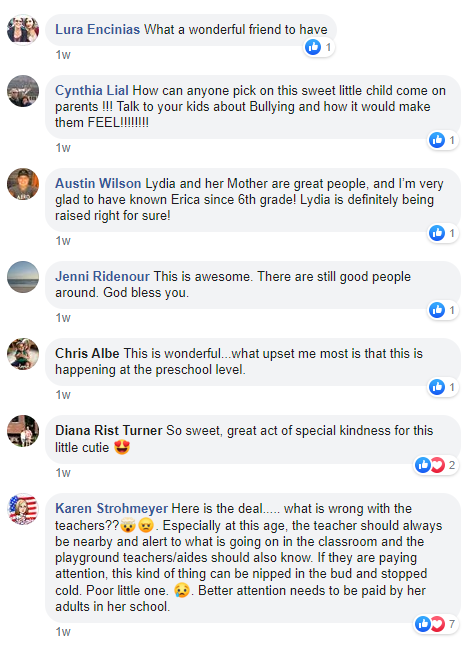 READ: Bengaluru Artist Who Posed As Astronaut Speaks Out After Viral Video