United States' lawmakers and top officials of the White House celebrated Diwali with members of the Indian diaspora at Capitol Hill. 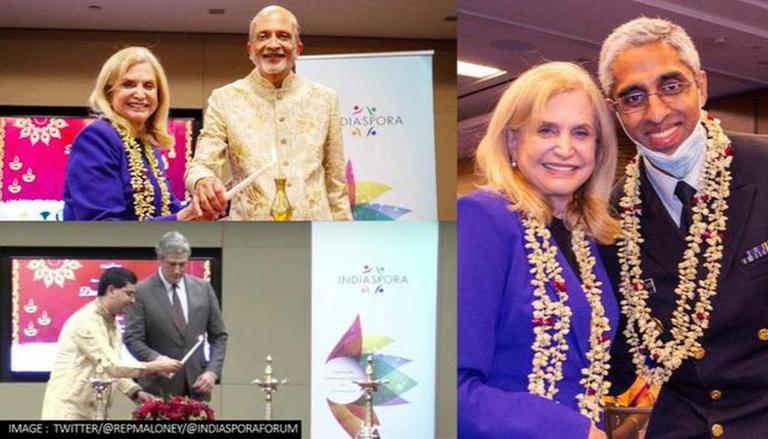 
United States' lawmakers and top officials of the White House celebrated Diwali with Indian diaspora on Capitol Hill. The Diwali celebration at Capitol Hill was organised by Indiaspora. During the programme, the diaspora honoured some of the top Indian Americans in the US President Joe Biden's administration, according to ANI. The top Indian Americans who were honoured included Vice Admiral Surgeon General Vivek Murthy and Neera Tanden, Senior Advisor and Staff Secretary to President Biden.

During the celebration, the traditional 'Diya' was lightened and several lawmakers made their remarks. Congressman Ami Bera, Pramila Jayapal, Congressman Ro Khanna and Congressman Raja Krishnamoorthi addressed the community members. Speaking to ANI, Ami Bera highlighted that the Diwali celebration is not only about Indian Americans but also the members of the Congress, which includes both Republicans and Democrats.

"As an Indian American to see the Diwali celebrations getting bigger at the Hill, is not just about Indian Americans but also members of the Congress both Republicans and Democrats. Diwali is about coming together and enlightenment, that's something to remember," Congressman Ami Bera told ANI.

U.S. @Surgeon_General @vivek_murthy gave a moving speech at our Diwali celebration, highlighting how his grandmother has provided him with great support and inspiration throughout his career.#happydiwali pic.twitter.com/amsxT6BxzZ

An interfaith prayer service took place during the programme that had members of Congress in attendance. In a tweet,  Indiaspora informed that Congresswoman Carolyn Maloney told them about her efforts to get Diwali recognised as a federal holiday in the US, according to ANI. Singer Mary Millben was also part of the celebrations at Capitol Hill. She sang the 'Om Jai Jagdish Hare' aarti rendition for the community with others hymning too. Millben told ANI that she has a "strong relationship" with the people of India. Furthermore, she mentioned that she loved the culture of India and was "delighted" to be part of the Diwali celebration.

Thank you so much to @RepMaloney for your support for the Indian Diaspora 🙏🏽 https://t.co/qQpa51uR3m

Congresswoman @RepMaloney attended our Diwali Event to honor Indian Americans in Public Service. She told us about her efforts to get Diwali recognized as a federal holiday in the United States. pic.twitter.com/tpOo18qthy

"Today and into the future we move together" said Congressman @RepTimRyan at our Diwali Celebration.

Congressman James Clyburn, Steve Chabot, Congresswoman Judy Chu and Carolyn Maloney lauded the efforts of Indian Americans in the development of the US. M R Rangaswami, founder of Indiaspora told ANI that the Indian Americans, African Americans, Chinese Americans, mainstream American Congressman participated in the celebration with Indian Americans. Vice Admiral Surgeon General Vivek Murthy highlighted the importance of Diwali which is about "light overcoming darkness" and he was "grateful" to be part of the celebration. He raised the concern that in the present time, there's an "invisible pandemic" which is the "pandemic of polarisation".

"But one of the things that concerns me most about the last few years is another type of pandemic, the invisible pandemic that we are in the midst of. That's a pandemic of polarisation where it feels increasingly people have turned against each other, where they have demonised one another, called each other evil and treated each other as so. That's a particular kind of darkness," ANI quoted Vivek Murthy as saying.

Majority @WhipClyburn told us his reason for having the likeness of Mahatma Gandhi present in his public appearances in a moving speech at our Diwali Event in DC. Thank you so much to all who attended! pic.twitter.com/KkLDxZSuhm