Former US President Donald Trump, on March 20, made a public appearance at his Florida residence where he ridiculed his successor Joe Biden for tripping thrice. 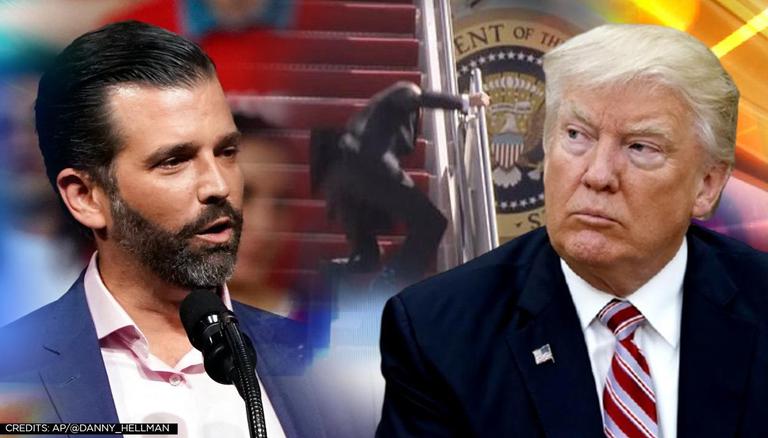 Former US President Donald Trump, on March 20, made a public appearance at his Florida residence where he mocked Joe Biden for tripping thrice on the stairs. Meanwhile, his son Donald Trump Jr took it a step ahead as he shared an edited video of Biden falling. Their reaction came just a day after the incumbent president was caught on camera stumbling while boarding Air Force One during his ongoing trip to Georgia.

‘We did not lose to him’

The Top Republican also used Biden’s gaffe to retaliate his claim of electoral victory. Addressing his followers and media at the opulent Mar-o-Lago resort, Trump said that he did not lose to someone like Biden. “I watch as Joe Biden went up the stairs today and I said ‘I didn’t lose to him,’ which we didn’t lose to him,” he said.

Later in the day, Donald Trump Jr also took the opportunity to tease Biden. Taking to Twitter, he posted a 10-second long video which showed Biden falling on the staircase after getting hit by a golf ball shot at him by Donald Trump. “Wait you’re telling me this is edited???,” he joked.

Wait you’re telling me this is edited???
I’m sorry, I had no idea I was spreading this kind of gross disinformation. https://t.co/ulLZTLtciK pic.twitter.com/8k6hlQ2UXe

Meanwhile, the White House has shunned any kind of speculation that arose from Biden's misstep. Addressing media reporters, the White House Press Secretary said that Biden is "100 per cent" fine and "preparing for his trip". The 78-year-old caught eyeballs after the president, on Friday, commenced his trip to Georgia to assess the COVID-19 situation in the country.

Video of the 78-year-old president stumbling upon the staircase went viral on social media. The video shows Biden holding on to the side railings as he attempts to climb the staircase amid windy weather. After the triple fall, he was able to recover, gain balance, and later gave the customary salute from the top of the staircase before boarding the flight.