Drama picked up after Musk replied on US chair of Senate Finance Committee’s profile picture, making scathing remarks on the latter’s physical appearance. 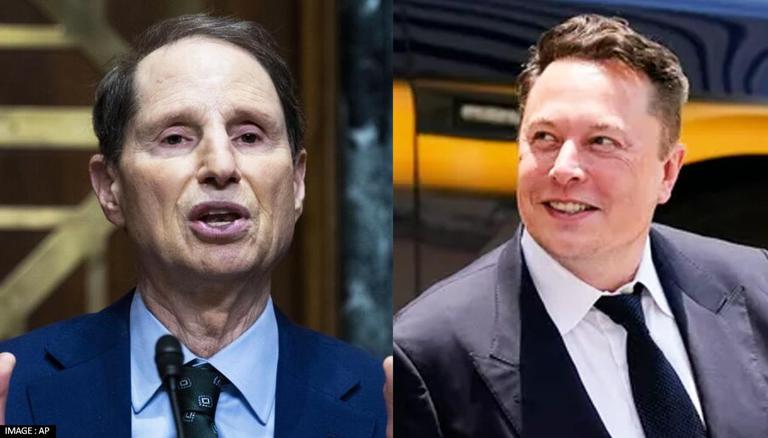 
Just days after Tesla’s chief executive and the world’s richest man Elon Musk initiated a Twitter poll, that some on Twitter labelled a “soap opera,” to decide whether or not to pay his taxes, an Oregon Democrat, who offered unsolicited advice to Musk, earned the billionaire’s wrath on Monday. US senator Ron Wyden appeared to take a swipe at the tech entrepreneur by floundering on his so-called Twitter poll as he unveiled an opinion on whether or not the Tesla boss should sell a big chunk of his EV company Tesla’s shares, and pay that money in taxes.

Following Wyden’s comments, the tax tiff between Musk, Senator, and Senator’s son who later joined the duo intensified, ending in Musk launching personal, rather crude, and vulgar insults at the US Senator on social media. “Whether or not the world’s wealthiest man pays any taxes at all shouldn’t depend on the results of a Twitter poll,” Sen. Wyden wrote in a response to Elon Musk’s poll which the latter did not appreciate. The Senator went on to add: “It’s time for the Billionaires Income Tax.”

The drama picked up after Elon Musk replied on the chair of the Senate Finance Committee’s profile picture, making scathing remarks on the latter’s physical appearance and drawing sexual comparisons. Musk, who recently changed his name on Twitter to "Lorde Edge,” wrote: "Why does ur pp look like u just came?”

Ignoring the Tesla CEO’s insults hurled at his dad, Senator Wyden’s son, Adam Wyden, a Miami-based hedge-fund manager barged in to lambast his father’s taxation policies. Shortly, many other lawmakers weighed in.

“Why does he hate us / the American dream so much?!?!?!?!” the junior Wyden wrote criticising his dad and surprisingly siding with SpaceX CEO Elon Musk. Furthermore, Adam went on to add: “Reality is, most legislators have never built anything [hinting at his father] so I guess it’s easier to mindlessly and haphazardly try, and tear stuff down.” 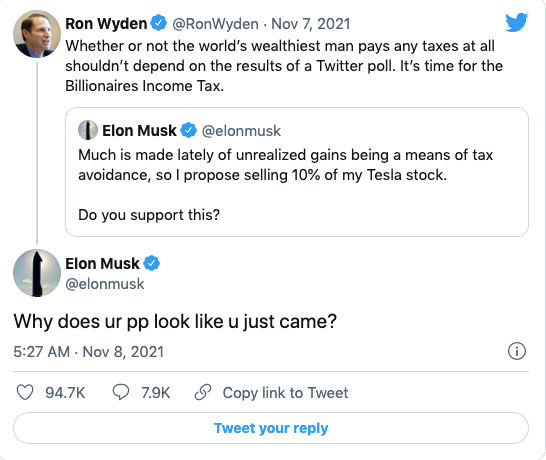 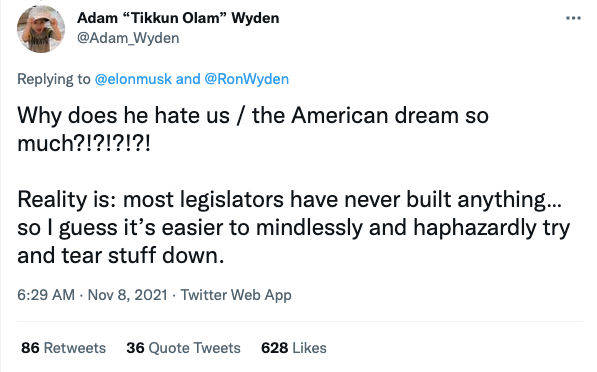 Anyway, the wealthiest people in America only paid ~8% in taxes in recent years, a lower rate than the average American by several points.

An Unrealized gain on an appreciated asset is not income. Congress can't redefine income. If you want to tax billionariars more heavily you need to find a Constitutional way to do it. A much better idea is to slash government spending so everyone can have their taxes reduced.

Jesus: "It is easier for a camel to go through the eye of a needle than for someone who is rich to enter the kingdom of God.” - Mark 10:25 (NRSV)@GOP: Billionaires paying taxes is socialism!

I like Elon - he pays the Democrats in the Senate exactly the amount of respect they deserve. https://t.co/43UmlwelFP

Following the provocative tweets, Tesla's share price plunged Monday at 1700 GMT by about 3% as Tesla CEO and Democrat Senator had a back and forth about taxation on the rich corporations. While the lawmaker insisted that the billionaires must be taxed by targeting their stocks, and Musk shall pay taxes regardless of a fans' poll, Musk hit back making personal attacks in defiance of that idea. While Musk had agreed to sell about 10% of his stock in Tesla after nearly 58% of followers voted in favour of it, he had been a longtime critic of the government’s proposed taxation on unrealised capital gains that he had earlier warned could eventually hit middle-class investors.

Much is made lately of unrealized gains being a means of tax avoidance, so I propose selling 10% of my Tesla stock.

Do you support this?

“Any new unrealized capital gains taxes will slowly make their way down to middle-class retirement investments over the next several years,” Musk had tweeted sharing a proposal from congressional Democrats that was passed by a majority in the US Congress last week. Musk now faces a tax bill of more than $15 billion in the months to come, and regardless of the outcome of his Twitter vote, his auto car company Tesla is slated to put 10% of holdings on sale. “Much is made lately of unrealized gains being a means of tax avoidance,” Musk had acknowledged as he had launched the poll, adding “I propose selling 10% of my Tesla stock.”