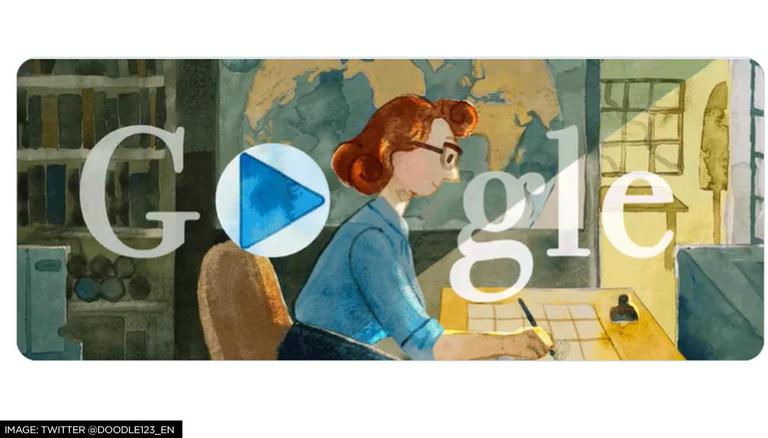 
Search giant Google has unveiled a special animated doodle video to honour the life of an American geologist and oceanographic cartographer who contributed to the validation of continental drift theories. Marie Tharp assisted in understanding and co-publishing the first world map of the ocean floors. The Google Doodle of November 21 includes an interactive biography of Tharp showing her journey of finding the continental drifts. Furthermore, the Library of Congress recognised Tharp as one of the 20th century's top cartographers on this day in 1998.

Besides this, three prominent women, Caitlyn Larsen, Rebecca Nesel, and Dr. Tiara Moore, who are actively carrying on Tharp's legacy by making advancements in the typically male-dominated fields of ocean science and geology, have provided narration for her story.

In the 1950s when much of the world was mapped, Marie Tharp helped to map the ocean bed when it was still a mystery. The animated video also stated that during that time, scientists studied the ocean floor with newly invented sonar.

On July 30, 1920, Marie Tharp  was born in Ypsilanti, Michigan. As per the Google Doodle page, mapmaking was introduced to Tharp by her father, who was employed by the US Department of Agriculture. She pursued a master's degree in petroleum geology at the University of Michigan, which was especially notable given the dearth of women in science careers at the time. In 1948, she relocated to New York City and was hired as the first female employee at the Lamont Geological Observatory, where she met geologist Bruce Heezen.

In the Atlantic Ocean, Heezen collected information on ocean depths that Tharp utilised to produce maps of the ocean bottom. She learned about the Mid-Atlantic Ridge which was due to the new information from echo sounders, a type of sonar used to measure sea depth. She informed Heezen of her results, but he allegedly disregarded them as "girl talk", as per the page.

However, Heezen was unable to dismiss the information, though, when they matched the V-shaped rifts with earthquake epicenter maps. The bottom was undeniably moving, supporting the hypotheses of plate tectonics and continental drift. The first map of the ocean floor in the North Atlantic was co-published in 1957 by Tharp and Heezen. Twenty years later, National Geographic released "The World Ocean Floor," the first map of the whole ocean floor that Tharp and Heezen had created.

In 1995, Tharp gave the Library of Congress the entirety of her collection of maps. She was recognized as one of the most significant cartographers of the 20th century by the Library of Congress at the 100th anniversary celebration of its Geography and Map Division. The observatory where she began her career gave her the inaugural Lamont-Doherty Heritage Award in 2001.