Ahead of the International Yoga Day, more than a hundred people gathered at the iconic Niagara Falls and performed the exercise with full enthusiasm on Sunda 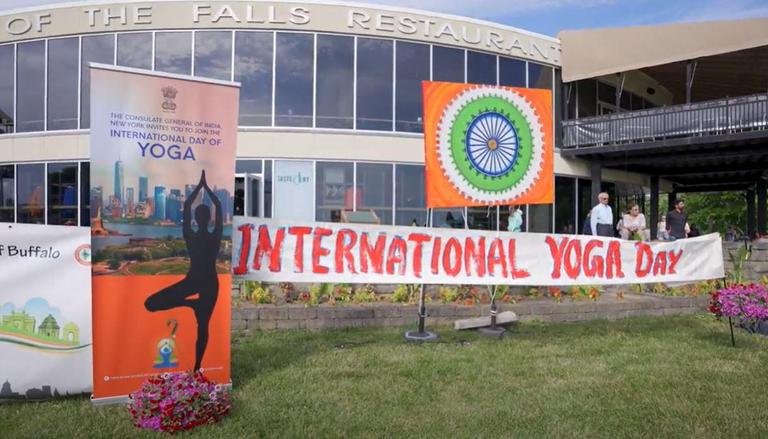 
Ahead of the International Yoga Day, more than a hundred people gathered at the iconic Niagara Falls and performed the exercise with full enthusiasm on Sunday. The event, which took place at the Goat Island of Niagara Falls State Park, was organised with the help of the Consulate General of India in New York, Buffalo-Niagara Tamil Mandram and the India Association of Buffalo on June 19. According to the video released by the Consulate General of India on its microblogging site, nearly 150 Yoga enthusiasts took part in the event. Notably, this was the first time when International Yoga Day was celebrated at Niagara Falls on the US side.

"Honored to be here on International Yoga Day- a worldwide celebration to bring peace to the world," said Yoga instructor Brian Ball, who has been practising Yoga for almost fifty years as he led the session. The yoga instructor further described Yoga as an important practice that originated in India by a group of several religious communities. He said that "Yoga is a gift from India," and added the exercises help the mind, body and spirit work altogether. According to the statement released by the Indian Consulate, members of the Buffalo Network of Religious Communities-- an organisation consisting of various religious communities in the region-- too participated in the Yoga celebrations. It said the Buffalo-based Indian community, extended their gratitude to the Indian government for organising such an event besides the iconic Niagara Falls.

READ | Yoga Day 2022: Here are some basic Yoga asanas for beginners to practice every day

Besides, the statement said that the members of the Indian community also attended the event in large numbers. "Indian students from the Buffalo area, studying in various institutions of higher education, also participated. Members of the media too were present at the event," according to the statement. "The celebrations concluded with plans to make it a standard feature of the Buffalo-Niagara region cultural calendar," it added. Meanwhile, another joinee, who attended the event that took place under Azadi ka Amrit Mahotsav, also greeted the consulate in New York City to bring people together and practise yoga in a meaningful way.

"Azadi Ka Amrit Mahotsav" is being celebrated in the country in commemoration of 75 years of independence of India, and the glorious history of its people, culture and achievements. It's a celebration of our collective achievements as a 75-year-old independent country with a legacy of 5000+ years of ancient history. The celebration rests on five pillars outlined by the Prime Minister i.e. Freedom struggle, Ideas at 75, Achievements at 75, Actions at 75 and Resolves at 75 as guiding forces for moving forward and Keeping dreams and duties as inspiration.